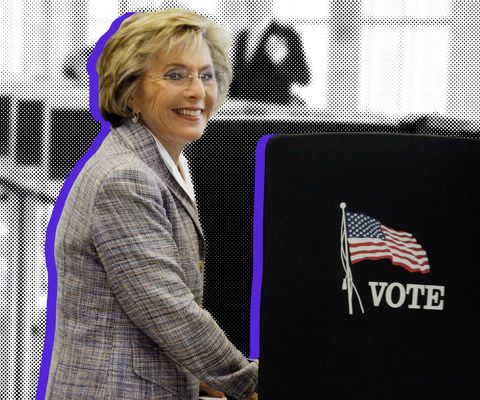 Every Tuesday for the next two weeks, former senator Barbara Boxer and her filmmaker and activist daughter, Nicole Boxer, who host a political podcast together, will break down everything you need to know about the midterms, from the issues at stake to the candidates who deserve our vote. Women have suffered some tough blows recently, but we can fight back. This week, the mother-daughter duo encourage you to go vote—because voting is good for the soul.

When I was a child living in New York City in the 1940s, my mother brought me along with her to the polls. She was among the first generation of women who enjoyed the right to vote. It was exciting for me to be with her as we ventured into the crowded polling station. When it was our turn, we ducked into the voting booth. My mom pulled the mysterious velvet curtain around us and let me push the levers to punch the voting card. I remember she whispered to me, “Honey, voting is so important. Who I vote for is our secret. I don’t even tell Daddy!” I’ll never forget the warmth I felt in the afterglow of that moment. And the sense of power, too.

I don’t think Americans today understand how hard it has been for so many of us to get the right to vote, the hard fought victories won on behalf of voter rights. When our country was founded in 1776, only white men who owned property were guaranteed the right to vote, followed in the 1850s by all white men. It wasn’t until 1868 that African-American men earned the right—at least on paper. For women, their battle succeeded in 1920, but other marginalized groups, such as Native Americans and Chinese immigrants, had to keep up the fight for the franchise. Today, residents of Washington, D.C. still do not have equal representation in Congress.

Barbara, pictured with her husband, voting in the primaries during her first senate run, in 1992.
Courtesy

I share this history with you to ensure you understand the awesome power of your vote. It all comes down to today.

Last week, I watched Oprah Winfrey campaign for democratic gubernatorial candidate Stacey Abrams in Georgia. I got the chills as she talked about discrimination and the shameful history of voter suppression. She poignantly told the story of an African American man during the Jim Crow era, who walked for miles and miles to three different polling places only to be turned away, denied the opportunity to cast his ballot.

Voter suppression continues to this day and every single person must stand up against it. We can’t all leave our everyday lives and rush to polling places in faraway states to help our sisters and brothers vote, but we can and must exercise our voting rights ourselves and elect people who will, among other things, stop voter suppression.

We can and must exercise our voting rights ourselves and elect people who will stop voter suppression.

We all know what is at stake: The quality of our lives, including our healthcare, our education, our jobs, and our ability to live on planet earth—all of these issues are on the ballot. This Election Day we will decide what kind of country we are, and the vote of a poor first-time voter is equal to the vote of a billionaire.

I was on the ballot in 12 elections in the past 40 years. In 1992, I had a chance to be part of the “Year of the Woman.” Would I make it? Could it actually happen? Because of the voters who cared, it did happen. Take it from me, voting is good for the soul.

Politics is in my DNA. As a Boxer, voting was a right-of-passage. One of my earliest childhood memories is the hubbub of election week around our home, the aroma of freshly baked cookies wafting through the air. Our home served as campaign HQ, jam packed with vibrant young men and women electioneering, stuffing envelopes, licking labels on local get-out-the-vote mailers, and prepping door-hangers for my mom’s first race for the Marin County Board of Supervisors. It was 1976, and she was one of the only women on the ballot, if not the only. I realize now how lucky I am to have a mom who isn’t just my mother but also a political trailblazer—a role model whose footsteps I purposely follow.

As the years roll on, I have come to realize that voting isn’t just a civic imperative. Voting is healing for the soul. Participatory Democracy groups like Headcount.org, Rock the Vote, Indivisible, Swing Left, Vote Save America, March for Our Lives, and I Am a Voter are investing not only people power, but the money, the time, and the tech tools to energize us to go to the polls in historic numbers. Swing Left announced that they would aim to inspire one million hours of people-powered, direct Get Out the Vote volunteer actions, including canvassing, phone banking, and bussing volunteers into swing districts. Were you among them? If so, doesn’t it feel incredible? As we come together with a common purpose we transform ourselves and the nation.

Nicole with her son, Sawyer Keegan, then-7, at a White House Congressional Picnic.
Courtesy

Another soulful way of looking at it is: “Voting is how we protect one another.” These profound words came from actress and activist Alyssa Milano with just five days to go before Election Day. Alyssa was responding to a question I posed during a live taping of The Boxer Podcast at the Women’s Power Summit in Los Angeles. I asked, “What would you tell a person who has convinced themselves not to vote this election cycle?”

By contemplating the most vulnerable in society—the LGBTQ community, the disabled, legal immigrants, and other minority groups under assault in Trump Country—you are truly living your best life when you cast your ballot. Having empathy and compassion is good for your soul.

Congratulations! Now you really are a voter. Will you take a pledge with me today to become a voter for life?

Related Story
Iconic Women Share Why They're Voting
Barbara Boxer and Nicole Boxer Until the day she left the United States Senate in January 2017, Barbara Boxer was a forceful advocate for families, children, consumers, the environment, and her state of California.
This content is created and maintained by a third party, and imported onto this page to help users provide their email addresses. You may be able to find more information about this and similar content at piano.io
Advertisement - Continue Reading Below
More From The 2018 Midterm Elections
One Week Post-Midterms Here's What We Know
How Ilhan Omar's Speech Started Is Important
Advertisement - Continue Reading Below
You Should Get a Dog! A Retired Greyhound!
What the Election Results Mean for Abortion
Women Won Big on Tuesday. Now Let's Get to Work
Deb Haaland Will Rep Indigenous People Nationwide
The Greatest Feminist Wins of the Midterms
Gretchen Whitmer Is Ready for the Top Job
Every Celebrity Who Voted in the 2018 Midterms
30 Celebrities Who Have Endorsed Politicians