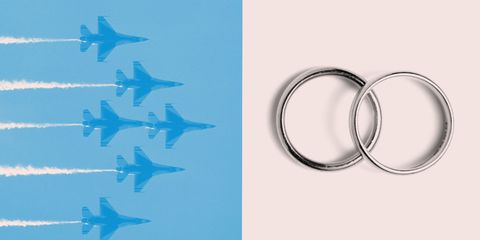 The only other time I felt this insecure about our life as a military family was in March of 2003. I was seven months pregnant, on bed rest for stress-induced pre-term labor, watching CNN. I could barely see the television over the tent-like nightgown covering my enormous stomach. The screen cut to jets flying over Iraq, part of President George W. Bush's "Shock and Awe" campaign. I knew my husband was in the cockpit of one of those airplanes, or preparing for a flight on the carrier circling below.

"I trusted the White House and Pentagon to act in good faith when dictating the fate of the troops, of my husband."

To calm myself, I recited the unofficial military family mantra: "Whatever the outcome, it's worth it because __________." In that moment, I told myself the danger and the struggle and the distance was worth it because the government and military were operating together to restore justice to a country that badly needed it. Something about this unity of purpose, the shared risk and shared commitment, eased my angst.

My kids waiting for their dad at the airport post-deployment
By 2007 the war in Iraq—whose mission was declared "accomplished" in May 2003—was still raging on. I had just agreed to pen a memoir about our experience as a military family enduring prolonged wartime deployments, and my publishers were hungry for a controversial, sales-inducing title like, "Military Spouse Rails Against the White House."

My husband, an active-duty Navy pilot, was already spending six to eight months at a time in war zones, and we knew he would be tapped for more time away in the future. I wasn't happy about this, but I understood why it was required. Despite ideological differences, I trusted the White House and Pentagon to act in good faith when dictating the fate of the troops, of the man I loved and the father of my children. I trusted that Bush and his closest advisors—many of whom wore the stars and stripes of past service—would treat deployment with the requisite seriousness. That's why I declined to author a provocative tell-all to advance my career. Instead, I wrote a book that answered a question military spouses are often asked: "How are you holding up?"

I wish someone would ask me that now, two months into the Trump administration. (The answer: Not well.) I wish there was a how-to book to guide military families through a Commander in Chief who live-Tweets his presidency, disparages judges, rejects intelligence briefings that don't align with his narrative, leverages his position to promote personally gainful commercial ventures, maligns an entire religion, supports the dismantling of government institutions, smears our former president, and threatens our free press. A Commander in Chief who blames his generals for a failed operation.

I felt a chill run down my spine when President Trump, speaking last month about the death of Navy SEAL Chief Petty Officer William "Ryan" Owens, said of generals overseeing the raid in Yemen, "they lost Ryan."

"Watching a 'chaos candidate' move into the Oval Office triggers new fears, like geopolitical conflicts spiraling because of a perceived Presidential slight."

"They" not "we." With one word, President Trump dug a fresh, deep trench in America's civil-military divide. It's a gulf that separates those who live their lives free of an obligation to fight for their country and those who have pledged to serve. Using Trump's linguistic formula, those who choose this service work for, rather than on behalf of, their fellow Americans. The generals who "lost" Ryan work for Trump (and, it is implied, failed him). There's subservience rather than common purpose. That's why to me, those three words—"They lost Ryan"—betray not just Chief Petty Officer Owens and his family, but all service members and their families.

That sense that we're all in this together? Gone. As an American, that's disturbing enough. But as a military spouse, watching a "chaos candidate" move into the Oval Office triggers additional fears: geopolitical conflicts spiraling out of control because of a perceived Presidential slight; alliances weakened due to impulsive executive branch actions; manipulation of the Administration's facts and figures to justify a storyline; outside influences determining military moves.

Like most Americans, I lack inside information on how Trump's government operates. Many of my conclusions come from the military officials and government civilians who have leaked information to the news about misuses of power and long-accepted approaches to governing being subverted, sounding a siren for the rest of us.

I hear that siren loud and clear, and it informs my decision to write, speak, and march as the wife of a service member. Alarmed groups of veterans and their families, like VoteVets, Common Defense, and Homefront Progressives, are organizing to protect the interests of service members, retirees, and family members who believe that we are ill-served by President Trump's plans. One veteran argued that Trump's appropriation of Ryan Owens' heroism during the Congressional address was "stolen valor on a presidential scale." Others argue that Trump's travel ban endangers American troops overseas. One former Marine wrote recently that the new President's stance against jihadism has prompted him to re-examine the reasons he was proud to wear the uniform.

"Outdated stereotypes of military wives prevail: we knew what we signed up for when we got married, so we have no right to complain."

Not everyone agrees with my decision to speak up. Some of my fellow military spouses have told me that they are worried about "not staying in their lane," or that they have heard stories about a wife's publicly-stated political views negatively affecting a husband's military career. (For the record, the Department of Defense prohibits active-duty military members from directly participating in partisan political activities, but this does not apply to civilian family members.) Most just feel that no one would care about or understand their concerns if they did voice them.

That explanation makes sense. Outdated stereotypes prevail: we military wives should be stoic in support of our husbands; we lack patriotism if we dissent; we knew what we signed up for when we got married, so we have no right to complain.

Despite my personal concerns for our family during the many missions my husband flew over the Arabian Gulf, I knew what to expect from the government that sent him there, and that was comforting. I felt confident that long-established alliances would continue to be strengthened; admirals and generals with experience on the ground would continue to influence Presidential judgments; the administration would continue to accept responsibility for fallen service members and strive to assure that their sacrifices were honored. None of those things appear to be true anymore.

I had a long-held certainty that spending a life serving our country is worth the cost because our elected officials stand by us just as we stand by them. Lately, I struggle to complete the rest of that military mantra. I struggle to see the worth.