One of the more surprising possible candidates in the 2020 presidential race is Howard Schultz, the former CEO of Starbucks. He's, uh, also one of the 250 richest people in the United States, with a net worth of around $3.4 billion, according to Forbes. Schultz says he's thinking of running as an independent candidate, even though he's been a Democrat for years. Right now, the ex-CEO is "still considering" his options, but he and his family will be ones to watch in the coming months. Sheri Kersch Schultz, Howard's wife, is a particularly influential force in Schultz's life, and her perspective will be an important factor in whether Schultz chooses to run or not.

Here's everything we know about the woman who, should Schultz succeed, would be First Lady—and even if Schultz decides to run and fails, we'll still see a lot of on the campaign trail.

Kersch Schultz grew up in Lima, Ohio, and she got her undergraduate degree in political science from the University of Denver. She met Schultz in the Hamptons in 1978, while she was studying interior design.

Schultz was attracted to her "Midwestern values."

Per his book, Schultz liked Sheri immediately. "With her flash of long wavy blonde hair and unflagging energy, Sheri attracted me with her impeccable style and class," he wrote. "She was not only beautiful but well-grounded, with solid midwestern values, from a close and loving family."

He added: "We were both starting our careers, without a care in the world. We began dating, and the more I got to know her, the more I realized what a fine human being she was.”

Kersch Schultz has been with her husband since the very beginning of his Starbucks dreams, and Schultz has credited her for much of his success: "If she wasn't as supportive then as she was, I don't think we would be here today."

She was the breadwinner.

"She said, 'We're going to follow these dreams that you have. We're going to see this through,'" Schultz told Huffington Post. "And here we are."

She's active in the nonprofit space.

Kersch Schultz cofounded the Seattle-based Schultz Family Foundation in 1996 with her husband and has served as its president ever since. The foundation focuses on youths and veterans, and creates pathways for the underserved populations.

"A passionate volunteer and long-time advocate for at-risk youth, Sheri recognized early in her work shaping the foundation how a fractured system of social supports was failing to reach people who were motivated but unable to escape homelessness or poverty, or simply to improve their lives," according to the website.

And she's a vocal advocate.

In October, she was the keynote speaker at YouthBuild USA, where she spoke about the foundation's work. Schultz praised her, saying, "Your dedication...is an inspiration."

Kersch Schultz does have social media, but it's a private account, so she's more low-key in terms of publicity than her husband.

She's been discussing Schultz's political future with the family.

In the 60 Minutes interview in which Schultz said he might run, Kersch Schultz admitted she hadn't expect a political career for the family. "Well, it, it wasn't in my plan, my long-term life plan for sure," she said.

She added that Schultz respectfully asked about this big life decision, and that the family is working it out: "He's still asking, and [we're having] many family meetings."

Related Stories
Bernie Sanders Has Dropped Out of the Race 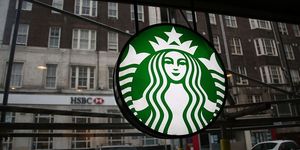 Starbucks Announces Plans to Hire 10,000 Refugees
Katherine J Igoe Katherine’s a Boston-based contributing editor at Marie Claire online who covers celebrity, fashion, entertainment, and lifestyle—from “The Bachelor” to Everlane to Meghan Markle.
This content is created and maintained by a third party, and imported onto this page to help users provide their email addresses. You may be able to find more information about this and similar content at piano.io
Advertisement - Continue Reading Below
More From Politics
How to Help Black Lives Matter If You Can't Donate
Does Your State Have a Tampon Tax?
Advertisement - Continue Reading Below
What's Ranked-Choice Voting? Allow Us to Explain
Paid Leave for All Isn't Just a 'Women's Issue'
Yes, Caregiving Is Essential Infrastructure
Unforgettable Signs From the Protests
23 Ways Women Still Aren't Equal to Men
Ma’Khia Bryant: What We Know
Greta Thunberg Expertly Trolled Boris Johnson
The Hope and Heartbreak of Derek Chauvin's Verdict