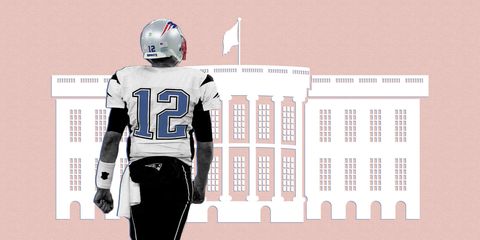 Today, the New England Patriots will visit the White House to commemorate their recent Super Bowl win with a photo op alongside our president. The celebratory tradition of sports teams visiting the White House dates back to at least 1865, when the Washington Nationals and Brooklyn Atlantics baseball teams accepted an invitation to meet with President Andrew Johnson. The Boston Celtics were the first NBA team to visit in 1963, meeting with President John F. Kennedy, while the Pittsburgh Steelers began the tradition of top NFL teams trekking to 1600 Pennsylvania Avenue when they met with President Jimmy Carter in February of 1980.

The Patriots' trip to the White House will be their fifth in the past fifteen years, but the first time Donald Trump is the host. The visit is not insignificant: the Patriots comeback Super Bowl victory was one of the biggest wins yet for our embattled president, who counts Quarterback Tom Brady, owner Robert Kraft, and head coach Bill Belichick as personal friends. Like Trump's election showing, the Patriots were trailing bigly before staging an improbable comeback to stun the Atlanta Falcons, sending social media into a frenzy over who could come up with the worst "Atlanta won the popular vote" jokes.

Trump better savor bro-ing down with the Boston boys, because I don't see a scenario in which the next American sports team to hoist a world championship trophy sets foot inside his home.

Besides the parallels to his own shocking victory, the Patriots' triumph provided another hidden boost for Trump's ego: His ties to the team all but guaranteed he wouldn't be faced with the embarrassing prospect of the first club to win a major US sports championship during his presidency boycotting a trip to the White House. The Chicago Cubs, after all, raced to D.C. to meet with President Obama just days before Trump was inaugurated. POTUS better savor bro-ing down with the Boston boys, because I don't see a scenario in which the next American sports team to hoist a world championship trophy sets foot inside his home.

It should be comforting to the Resistance that the Patriots' White House trip comes during the first week of the NBA playoffs—there's little love lost between Trump and America's professional basketball league. Trump's long-running feud with Shark Tank host and Dallas Mavericks owner, Mark Cuban, is so fraught that in 2014 he tweeted "Major League Baseball was really smart when they wouldn't let Mark Cuban by a team. Was it his financials or the fact that he's an asshole?" The president has tweeted about the NBA itself eight times during his many years on the social networking site, often about his billionaire friend Mickey Arison, who owns the Miami Heat. "As one of Miami's largest landowners I am pulling for the @MiamiHeat in the @NBA finals," he tweeted in June of 2012. "LeBron's time is now! @KingJames." The Heat would go on to win the NBA title that month, and repeat as champs the following year. Unfortunately for Trump, Arison's team didn't make the playoffs this year. James' team did, but he's no fan of the president.

King James out on the campaign trail with HRC, November 2016.
Getty Images

After campaigning for Hillary Clinton in Ohio last fall, the Cleveland Cavaliers superstar posted the following note on Instagram the day after the election: "Minorities and women, please know that this isn't the end. It's just a very challenging obstacle that we will overcome." When the Heat traveled to New York in December, James refused to stay at the Trump SoHo hotel with the rest of the team. He supported the women's march, decried Trump's Access Hollywood tape and his travel ban, and compared eyebrow-raising NBA all-star voting to the election: "There's always goofy votes," he said. "Donald Trump is our president."

The Cavaliers won the NBA championship in 2016, and at press time Vegas gave the club 7/2 odds of repeating. I reached out to the team to ask if they would go to the White House if they came out on top. "We really wouldn't comment on something like this prior to winning," said Tad Carper, senior vice president of communications for the Cavs. "(We) still have to go out and earn the title."

The team with the best odds of winning a championship this year is last season's runner-up, the Golden State Warriors. This also spells bad news for the Donald. After the election, Warriors coach Steve Kerr addressed the media, saying, "All of a sudden you're faced with a reality that the man who is going to lead you has routinely used racist, misogynistic, insulting words….We talked about it as a team this morning. I don't know what else to say. Just the process has left us feeling disgusted and disappointed. I thought we were better than this." For his part, the Warriors mild-mannered superstar point guard Steph Curry called Trump an ass. I wrote to the Warriors to pose the same question I asked the Cavs. "We had several similar inquires around the time of the election and we basically told people that is something we would address if we were fortunate enough to be in that position at the end of June, but not something we'd think about until then," wrote Dan Martinez, senior director of public relations.

NBA commissioner Adam Silver has said that any player who decides not to go would be passing up an unparalleled opportunity to tell Trump how he feels about a certain issue.

The San Antonio Spurs have the third best shot of winning the championship, with 13/2 odds. The club did not respond to my request for comment regarding a White House visit, but it's difficult to imagine how such a trip would go down after head coach Gregg Popovich compared Trump's election to the fall of Rome.

But NBA commissioner Adam Silver wants the team that wins the title to go to Washington. He told The Undefeated in December that any player who decides not to go would be passing up an unparalleled opportunity to tell Trump how he feels about a certain issue. He added, though, that if the president made it clear that he does not care what NBA players think, Silver might agree with their wish to boycott.

Silver encouraging his players to speak out is nothing new. While the NFL has struggled to find its footing during an age of heightened political protest—Niners QB Colin Kaepernick has ostensibly been blackballed for kneeling during the national anthem— the NBA has supported players who have spoken out about gun violence and police brutality. It also moved last year's all-star game out of Charlotte in response to North Carolina's discriminatory transgender bathroom law. The NBA's status as the unquestioned wokest league in the land in unsurprising given its demographics: minorities outnumber white players roughly three to one. And according to a study on fivethirtyeight.com, most NBA teams have majority-minority fanbases.

At least six Patriots players have said they will not go to White House for political reasons today (in addition, Brady announced this morning that he will not be attending due to "personal family matters"). But their absence will not create an embarrassing visual: Every NFL team features 53 active players; Rose Garden attendance won't look any sparser than usual. NBA rosters, on the other hand, have roughly fifteen players each. So, even if only a handful of players boycotted a White House ceremony, that would leave Trump to pose for a picture without enough guys to form a starting lineup, perhaps standing next to a man who physically dwarfs him while wearing a t-shirt that needles his divisive agenda.

It's tough to imagine an NBA team visiting the White House for as long as Trump is president. Such an event could only come on the heels of an apology tour or an exorcism—and both seem just as unlikely.