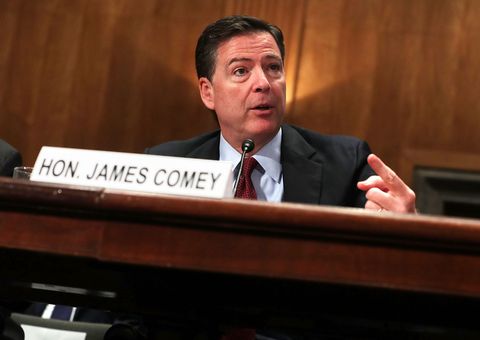 Pretty much everyone in the world instantaneously found out that former FBI Director James Comey was fired by President Donald Trump on Tuesday evening—including none other than Comey himself.

According to the New York Times, Comey had been in Los Angeles for various scheduled events Tuesday and was giving a speech to FBI employees "when a television in the background flashed the news that he had been fired." In response, he began to laugh,thinking that the broadcast was a "prank."

Reports suggest his staff then quickly asked him to leave the room to discuss what had occurred, and that he was informed the news had not been a prank after all. The New York Times adds that Comey had allegedly not yet been informed by the White House of his termination at the time, but that a letter from Trump was delivered to his Washington, D.C., office "soon thereafter." Meanwhile, during his daily press briefing, press secretary Sean Spicer stated, "Today, President Donald J. Trump informed FBI Director James Comey that he has been terminated and removed from office."

Letters from Trump, Sessions, and Rosenstein on James Comey pic.twitter.com/msc7QBV3xL

"While I greatly appreciate you informing me, on three separate occasions, that I am not under investigation, I nevertheless concur with the judgment of the Department of Justice that you are not able to effectively lead the bureau," Trump wrote in the letter. "It is essential that we find new leadership for the FBI that restores public trust and confidence in its vital law enforcement mission."

"I wish you the best of luck in your future endeavors," he concluded.

At this time, Comey has not released a public statement on his termination, and deputy director Andrew McCabe has been appointed acting FBI Director in his place.