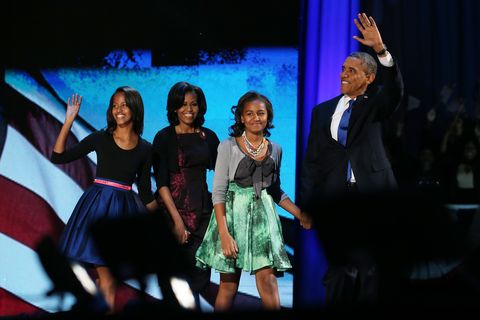 I can't help it. Every time a new Trump family controversy pops up—whenever I hear about Don Jr. and Russia or Ivanka and her faux-feminist brand built on sketchy labor practices—I think about all the apologies that are owed to the Obamas. Especially Sasha and Malia. I mean, really. Shame on us.

Sasha and Malia Obama are still being attacked for doing completely mundane things that are expected rites of passage for teenage girls.

The Obama girls were just seven and ten years old when they moved into the White House. They had to grow up watching their parents be unfairly attacked and sustained a childhood of public criticsm themselves. These are girls who never got to be girls; kids who were called classless for supposedly rolling their eyes at a turkey pardoning ceremony, who were attacked for the sin of being young and having the last name Obama, who are still attacked today for doing completely mundane things that are expected rites of passage. Oh my, they're at a music concert! Wow, a teenager kissing a boy! How completely unexpected and strange!

Meanwhile, as the Right works itself into a tizzy over young women being young women, we're treated to Don Jr., a grown man with children of his own, being called a "kid" and "a good boy" to deflect from possible criminal activity. Or Ivanka—also an adult and an adviser to the President of the United States at that—being defended as even the mildest of criticism is called out of bounds, and banking on the exaltation of white femininity to sidestep reasonable concerns over her role in the administration.

But truly it's the entire Obama family who deserves an apology. Here was a family free from controversy—a family with small children, at the time—who was attacked incessantly. A family who never struck back, a family who rose above and put the country first. They brought grace and seriousness to the White House (remember that?), and were repaid with years of hatred and racism.

From the people, including Trump, who pushed false racist birther claims about President Obama to all those who made racist "jokes" over the years of his tenure to Fox News mocking him as somehow un-American for using Dijon mustard—year after year of petty slight and ad hominem attacks and still President Obama simply woke up and did his job. (Can you imagine our current crybaby-in-chief brushing off personal attacks the way his predecessor did?)

Our present reality: a man who runs the country as if it owes him constant ego-stroking. A man brought to us, in part, by the same racism behind so many of the attacks on the Obamas.

Or consider the avalanche of apologies that should, let's be honest, follow Michelle Obama for the rest of her life. The former First Lady was incessantly attacked with racist and misogynist taunts—slurs so awful I can't bring myself to recount or link to them. The woman who reminded us again and again that "when they go low, we go high," who responded to hatred with poise and promise. This is a woman who deserves our eternal respect and gratitude. Because we did not do right by her, not even a little.

Sometimes the memory of having a president and first family who actually knew things and who truly cared about people feels like a gut punch—it's so far away from our present reality: a man who runs the country as if it owes him constant ego-stroking.

We know that despite all of the hatred and nastiness the Obama family were subject to, they continued to be more interested in what was best for the country than what was best for themselves. Given that, I think it's safe to say they probably don't expect an apology. Even more reason why they deserve one.

Jessica Valenti Contributing Editor Jessica Valenti is a columnist and author of five books on feminism, politics, and culture.
This content is created and maintained by a third party, and imported onto this page to help users provide their email addresses. You may be able to find more information about this and similar content at piano.io
Advertisement - Continue Reading Below
More From Politics
It’s Time to End Equal Pay Days and Pass the ERA
In Conversation With Secretary Granholm
Advertisement - Continue Reading Below
Laphonza Butler on What's Next for EMILY's List
Anita Hill Believes We Can End Gender Violence
For Teachers, Going to Work Can Mean Life or Death
Want to Help Moms? Prioritize Menstrual Equity
Abortion Rights Start at the State Level
All of Your Abortion Questions Answered
The Texas Abortion Snitch Site Is Having a Bad Day
The Future of Afghan Women Depends on Us