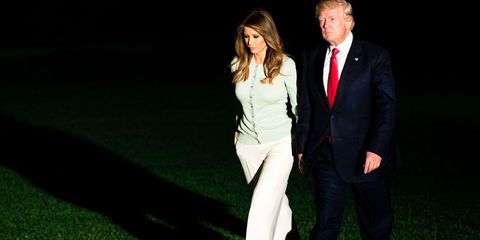 It was a moment tailor-made for the internet. When Melania Trump seemingly batted away her husband's outstretched hand as they arrived in Israel last week, the swat was gleefully meme-ified—the first lady's hand flick made into a gif, played in slow-motion, and covered by news outlets worldwide. The schadenfreudic fever was heightened a few days later when Melania appeared to recoil from Trump's touch a second time in Rome.

It's an understandable response on our part; there's something enjoyable about watching a man who thinks he can grab women's genitals with impunity being rejected by his wife. And for those of us who find it hard to fathom how any woman could stand to be in the same room as Trump—let alone his bed—it's satisfying to believe that Melania might hate him just as much as we do.

Melania provides the president with a polished cover both for his misogyny and his general ineptitude.

But projecting our disgust with Trump onto the first lady is a temporary cathartic fix at best. At worst, it's a willing disregard for how Trump's rise to the presidency has been powered by women: his wife, his daughter, and the 53 percent of white women who voted for him.

The idea of universal female disdain for this president is a nice fantasy, but if we're going to effectively fight back against Trump, we can't afford to empathize with his enablers.

For all the #FreeMelania rhetoric, this is a woman who has consistently and actively supported Trump's misdeeds. In 2011, Melania appeared on Joy Behar's CNN show supporting her husband's racist birther campaign; during the election, she dismissed Trump's boasts about groping women as just "how some men talk." The soon-to-be first lady also suggested that the women who accused Trump of sexual assault were lying or part of an organized effort by Democrats to malign her husband.

Along with her step-daughter Ivanka Trump—who gives her father full-throated support, going so far as to call him a feminist—Melania provides the president with a polished cover both for his misogyny and his general ineptitude.

Melania stands behind her husband at the inauguration ceremony
Getty Images

Take conservative writer Kathleen Parker's piece last week in The Washington Post, more love letter than column. When Trump visited Saudi Arabia, Parker wrote that Melania and Ivanka "stood as beacons of light in a part of the world that remains cloaked in the darkness...preternaturally beautiful, they seemed to glide as apparitions." Parker lauds the women for demonstrating to the world "that despite our coarse, ham-fisted president, we have not completely forsaken class." (Parker admits they did all this "wordlessly," because apparently the best accomplishment a woman can hope for is to be beautiful and silent.)

It's easier to root for a woman, to want her to "escape" a bad guy, than to admit she might be the bad guy.

This depiction of Ivanka and Melania as civilizing forces on Trump—a ridiculous assertion disproven over and again—is in part why so many women voted for a raving misogynist in the first place. Buzzfeed's Anne Helen Petersen called them the "Ivanka voters": "If Trump produced someone that classy, that's a testament to something," one woman told her. If Melania sees something in him, why can't we?

It's not a new tact for conservatives; they've long trotted out women to put a female-friendly veneer on their anti-woman policies: from Phyllis Schlafly telling Americans the Equal Rights Amendment was actually bad for women to Sarah Palin calling herself a feminist while the city she was mayor of charged women for their rape kits. But conservative women aren't unwitting pawns, and Melania and Ivanka don't deserve an ounce of sympathy nor the benefit of the doubt. Not while so many are in danger of losing their rights—or even their lives. 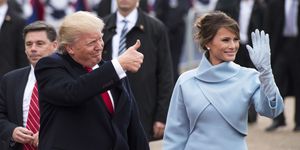 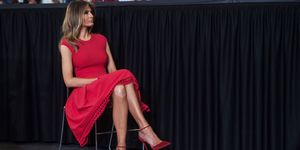 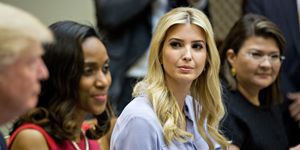 Ivanka Trump on Being "Complicit"

I get it. Given the way Trump treats women publicly, it's not hard to make the leap that he might treat them badly in private as well. It's why images of the first lady looking sad go viral, or why there's so much focus on the ungentlemanly way Trump often walks ahead of his wife. It's easier to root for a woman, to want her to "escape" a bad guy, than to admit she might be the bad guy.

There's nothing wrong with seeking levity in the news, given how horrific our politics are right now. And I will gladly admit that I played the video of Melania's hand slap more than once. But when the jokes are done, and we've logged off for the night, let's remember that it's not Melania who needs to be "freed." It's us.

Jessica Valenti Contributing Editor Jessica Valenti is a columnist and author of five books on feminism, politics, and culture.
Advertisement - Continue Reading Below
More From Politics
Everything We Know About Senator Warren's Husband
Mayor Pete's Husband Would Be a "First Gentleman"
Advertisement - Continue Reading Below
How a Parkland Mom Turned Her Grief into Action
He Voted for Trump. She Voted for Bernie.
How Guerrilla Feminists Are Fighting Femicide
Who Was Mayor Pete's Father, Joseph Buttigieg?
Nancy Pelosi, Icon, Ripped Up Trump's SOTU Address
Thoughts From a First-Time Caucus-Goer
And Now, a Word From the Future Voters of Iowa
Ayanna Pressley Wants Total Justice for Survivors