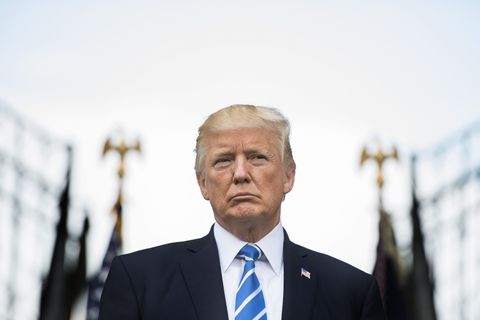 Earlier this year, MarieClaire.com reported on the rise of white supremacist movements in America, and the specific role that women play in their ranks. Following President Trump's controversial and continuing remarks about the Charlottesville march, we reconnected with one of the story's subjects, former neo-Nazi Shannon Martinez, to get her response. Martinez left her white-power skinhead gang in the 1990s after a youth of violent bigotry, and now volunteers for the nonprofit Life After Hate.

The imagery out of Charlottesville wasn't shocking to me, because I've seen those flags and those faces, heard those chants and screamed them myself. I have attended Klan rallies; I know what that anger feels like. I'm not surprised it erupted in violence, because most of my activity as a neo-Nazi skinhead involved skulking around bars and looking for a fistfight. It's a tactic: Incite violence so they can point to the resulting chaos and say that yes, white European culture is under attack.

"They will die thinking he was the greatest president who ever lived."

What did surprise me was that President Trump turned around after his statement on Monday—in which he finally called out white supremacists and neo-Nazis and the KKK—and posted the imagery of a train running down a journalist right after a neo-Nazi ran down an innocent woman. "Nanny nanny boo boo," is what I heard. Anyone who has any questions about his moral character, or where his heart is, needs to look no further than that tweet. And still, his supporters will see nothing wrong with it. They will die thinking he was the greatest president who ever lived.

I joined the skinheads in high school because I was consumed by rage. I hated myself, I hated my classmates, I hated my family, and I hated the trauma in my past (I was raped by two men at a party when I was 14). I entered the punk-rock scene and everyone was so angry, too. I thought, These are my people. This is who I want to be around. Screaming racial epithets at people of color on the street was just the price of admission, and I didn't mind it.

I already hated everyone, so it wasn't a big leap for me to agree with the crowd and say, "I hate black people, I hate Jewish people, I hate everyone who is not like me." It was almost a relief, honestly. It went from an unnameable rage to rage with a purpose. It made my anger smaller.

A scene from this weekend's
Getty Images

Trump gives people a purpose for their hate, too—he gives them targets. He says it's the Mexicans, the immigrants. It's Muslims. It's transgender people in the military who steal resources. It's the media. It's the people tearing down Confederate statues. He takes their rage and fear about joblessness, or lack of opportunity, or lack of fulfilled lives, and instead of talking about how we as a society can fix them, he says, These groups are to blame. Let's hate them.

"Trump gives people a purpose for their hate, too—he gives them targets."

Of course, racism has been part of American culture since its inception. It's what we were founded on. It's not some new darkness. But it manifests in different ways depending on the social climate and who's in charge; it is repressed and pops up sideways, like in the growth of the prison complex. But Trump says we don't have to repress it anymore. He has a history of racism himself, and now as a leader he uses code words or dog whistles (like refusing to say Jews suffered on Holocaust Remembrance Day) or, this week, overt encouragement of white supremacy: "They're very fine people."

Those "fine people" know that now is their time. They have to mobilize now. This is the promised land. They suffered through the indignity of Obama, of having a liberal black man as their president, and now it's finally their turn (never mind the 43 other white men who have held the office). The appointment of Steve Bannon, the appointment of Sebastian Gorka—the white supremacists know exactly who these people are. Before, people would ostracize them for expressing these beliefs. Trump has taken the deterrent away. There are no more bad consequences. This the race war they've been waiting for. Trump gave the rallying cry.

What really scares me are the rest of Trump's voters, the other Republicans, the moderate right. Like some people I know who didn't think they were racist but then a Hispanic family moved into the neighborhood and "lowered their property value," or an Asian person cut them off in traffic and they let a slur fly. Those are the people who will parrot back Trump's language, repeat the talking points: "Both sides are to blame. Did you see the 'alt-left' with those baseball bats? Who's next, George Washington? Trump is the only one who will tell us the truth."

"This the race war they've been waiting for. Trump gave the rallying cry."

This content is created and maintained by a third party, and imported onto this page to help users provide their email addresses. You may be able to find more information about this and similar content at piano.io
Advertisement - Continue Reading Below
More From Politics
Scenes From the Historic Biden/Harris Inauguration
Women Wear Pearls In Support of Kamala Harris
Advertisement - Continue Reading Below
Moving Forward: A Better Future for Caregivers
This Is How Much Joe Biden Is Worth
Kamala Harris Is "Momala" to Two Stepchildren
This Is How Much Kamala Harris Is Worth
Joe Biden's Grandkids Are Among His Biggest Fans
Joe Biden's Son Beau and the Story of His Death
Jill Biden Could Transform the Role of First Lady
Joe Biden's Granddaughter Is His Biggest Fan