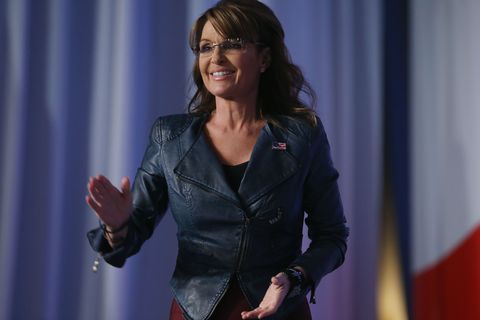 While serving meals at a homeless shelter in Las Vegas this week, former Vice Presidential candidate Sarah Palin told an ABC News reporter that she would, "of course," be interested in participating in the 2016 Presidential election.

"Yeah, I mean, of course, when you have a servant's heart, when you know that there is opportunity to do all you can to put yourself forward in the name of offering service, anybody would be interested," she said.

It felt a bit like she was putting out feelers, to potential voters and financial backers alike, perhaps hoping to duplicate the groundswell of support that led to her announcement as John McCain's Vice Presidential pick in 2008.

An election that revolves around the so-far rumored candidates—Hillary Clinton, Elizabeth Warren, and Sarah Palin—would be an amazing moment for women. Maybe we'll just leave the men out of it altogether this time around.

For now, check out Palin's sorta-kinda-maybe Presidential bid below:

Jessica Pels Editor-in-Chief As the editor of Cosmopolitan, Jess oversees the editorial for all of Cosmo's efforts across print, digital, video, and emerging platforms.
This content is created and maintained by a third party, and imported onto this page to help users provide their email addresses. You may be able to find more information about this and similar content at piano.io
Advertisement - Continue Reading Below
More From Politics
Five Women Share Their Stories of Gender Violence
Who Will Be in Joe Biden's Cabinet?
Advertisement - Continue Reading Below
The Global Fight for Black Lives
Michelle Obama on Welcoming the Trumps in 2016
There’s No Such Thing as the “Latino Vote”
Who Is on Joe Biden's Transition Team?
Joe Biden's Youngest Daughter Is An Activist
Joe Biden's Grandkids Are Among His Biggest Fans
Maya Harris Is Kamala's "Bobby Kennedy"
This Is How Much Joe Biden Is Worth