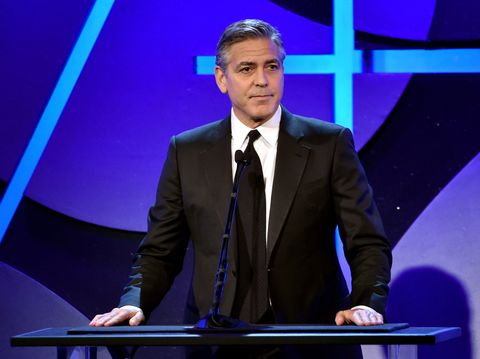 For years, George Clooney has used his spotlight to highlight the brutal genocide and war crimes in Sudan. But in a scathing op-ed for the New York Times, he called out the world for ignoring the brutality that's going on in the Darfur region.

Along with co-authors John Prendergast and Akshaya Kumar, Clooney details the horrific mass rapes and murders that are going on in western Sudan, which gained global prominence in the early 2000s. But "after that spike in attention and concern, the world has largely forgotten about Darfur," they write. "Unfortunately, the government of Sudan has not."

It's tough to get regular updates about the situation in Darfur because the Sudanese government threatens and blocks journalists, humanitarian groups, and even United Nations workers. But Clooney's Satellite Sentinel Project has captured images of bombings and devastation in the region.

There have been horrific mass rapes at "model villages" set up for refugees fleeing from ethnic violence, the op-ed alleges. More than 200 women were reportedly raped by the Sudanese Army over one 36-hour period. The army is using sexual violence for "social control, ethnic domination and demographic change."

Clooney and his co-authors call out the UN Security Council for being "too divided to respond with action," especially since countries like Russia and China have business interest in Sudan. They urge the international community to impose wide-reaching sanctions, and calling on global business, especially gold refiners, to make sure their actions don't fuel war crimes in Darfur.

"We must not forget the survivors," they write, "and we must impose deterrent costs on the orchestrators and their enablers." Read the full op-ed here.

George Clooney Gets Sappy Over Amal, We All Swoon