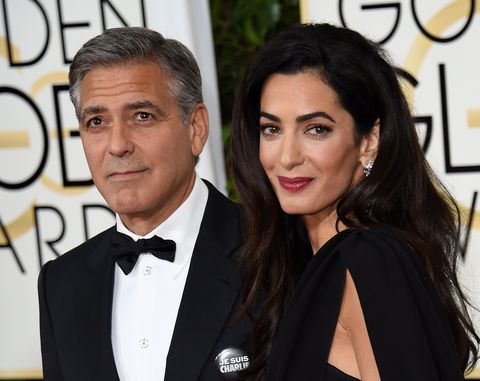 Update, 7/22: Totally unexceptional private citizens George and Amal Clooney have applied for a network of 18 cameras on 20-foot poles be installed around their $15 million mansion, and their neighbors are not terribly thrilled about it, the Times reports.

Calling the poles a "visual intrusion" and an invasion of privacy (pronounced with a short "i" if you're reading this in your head with a posh English accent like I am), the local parish council is moving for the plans to be rejected. Some context: They've previously campaigned against the couple's riverside boundary fence and lost, so this could really be turning into something of a grudge match. Further context: Given Amal's high-profile job and George's high-profile-in-a-different-way job, they could both use the protection against potential crazies.

Who will prevail: the famous people or the commoners? Bucolic views or safety? (Not unfounded) American paranoia or British stoicism?

Original post, 2/18: When you think of George and Amal Clooney, it's easy to picture them traveling the world, fighting for awesome causes, and just, you know, staring at each other's beauty. But there's a way darker side to being one of the most high-profile couples in the world.

According to Us Weekly, the Clooneys are having a high-security panic room installed in their new mansion in Berkshire, England. The space will be "fireproof, bombproof, and attack-resistant," a source told the magazine. On a more luxurious note, the renovated home will also reportedly feature a spa, steam room, and wine cellar...for when they're not holed up for their own security.

Here's what's even crazier: It's Amal's totally badass job that requires the room, not Clooney's megastar status. The international human rights lawyer works on controversial cases around the world, and reportedly needs a place where she can be sure her files aren't destroyed—and where she can be safe in case someone involved in a case shows up.

Add this to the ever-growing list of reasons George "married up."

This content is created and maintained by a third party, and imported onto this page to help users provide their email addresses. You may be able to find more information about this and similar content at piano.io
Advertisement - Continue Reading Below
More From Celebrity
Ryan's Mother's Day Tribute to Blake Is LOL
How Celebrities Are Celebrating Mother's Day 2021
Advertisement - Continue Reading Below
Queen Elizabeth Is Now Selling Beer and Gin
Meghan Markle Wore Carolina Herrera for Vax Live
Princess Charlotte, 6, Tells Everyone She's 16
Meghan Wears Cartier Tank Watch for Vax Live
J.Lo Sang a Sweet Duet With Her Mom at Vax Live
Meghan Discussed Her Daughter in Vax Live Speech
Prince Harry Talks Digital Pandemic at Vax Live
Harry and Will Have Been Arguing for Months Now