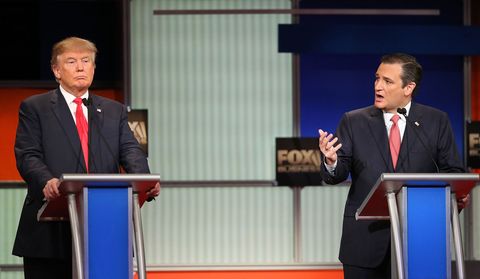 There are only a few weeks to go until the first presidential primary, and the candidates are upping their attacks on one another in hopes of gaining in the polls. Thursday night's debates, which aired on the Fox Business channel, got dirty, fast—and showed just how much of a threat Ted Cruz is against Donald Trump. If you didn't watch, here's what you missed.

1. Carly Fiorina got personal about Hillary Clinton during the undercard debate.

The Fox Business debate cut down the eligible mainstage candidates to seven, dropping Carly Fiorina to the undercard debate, where she took on Mike Huckabee and Rick Santorum. But really, she took on Hillary Clinton—and she hit below the belt, attacking her relationship with President Bill Clinton. "Unlike another woman in this race, I actually love spending time with my husband," Fiorina said. (She also used the barb earlier in the day at a campaign rally.) Despite (or because of?) the personal jab, Fiorina was considered the winner of the undercard match. Though in the end, the candidate who saw the biggest spike in Google traffic was Donald Trump, and he wasn't even on stage.

Rand Paul also got bumped to the undercard debate, but he didn't take the stage Thursday evening. Instead, the savvy senator decided to boycott the debate entirely, and get more publicity in the process. He went to Twitter's offices in New York and took questions from voters and journalists in what he called the Rand Rally. But he did make his presence known during the primetime debate; later on in the broadcast, protesters could be heard chanting "we want Rand!" as the moderators tried to ask questions.

3. Ted Cruz and Donald Trump stopped being polite, and started getting real.

In past debates, Donald Trump and Ted Cruz have declined to criticize one another. But now that Ted Cruz is moving up in the polls, especially in the first primary state of Iowa, the gloves came off, in a big way. Early in the debate, Cruz was asked about whether or not he's eligible to be president, because he was born in Canada. Trump said he was worried that the Democrats would pounce on the issue if he picked Cruz as his vice president, but Cruz didn't buy it.

"Back in September, my friend Donald said that he'd had his lawyers look at this every which way, and they said there was nothing to this. Now since September, the Constitution hasn't changed, but the poll numbers have," Cruz said. "And I recognize that Donald is dismayed that his poll numbers are falling in Iowa. But under longstanding U.S. law, if an American citizen has a child overseas, that child is a natural born citizen." Plus, he added, some hardcore "birthers" say a person isn't qualified unless both their parents were born on U.S. soil. If they got their way, "interestingly enough, Donald J. Trump would be disqualified because Donald's mother was born in Scotland."

Canada wasn't the only place that Ted Cruz and Donald Trump fought about. Cruz also slammed Donald Trump for coming from notoriously liberal New York. "I think most people know what New York values are," Cruz said.  "Not a lot of conservatives come out of Manhattan. I'm just saying." Trump took issue with that, saying that William F. Buckley, the founder of the National Review, was from New York. And then he closed the door on what "New York values" really meant by invoking the city's biggest tragedy. "When the World Trade Center came down, I saw something that no place on Earth could have handled more beautifully, more humanely than New York," he said. ""Everybody in the world watched and everybody in the world loved and I have to tell you that was a very insulting statement that Ted made."

The New York Daily News brought the sass with its Friday cover:

During her State of the Union response, South Carolina governor Nikki Haley called out Trump, saying people tend to "falsely equate noise with results." Since the debate was being held in her home state, moderators asked Trump what he thought about Haley's remarks. Trump bent over backwards to call the hometown favorite a "friend," and then fully accepted her comments about being angry. "I am very angry because our country is being run horribly and I will gladly accept the mantle of anger," he said.

The debate was mostly the Cruz and Trump show, but a few other candidates had their moments in the spotlight. Marco Rubio attacked Chris Christie for supporting traditionally liberal policies like Common Core, gun control, and Planned Parenthood, but Christie said his record proves otherwise. Later on, Christie interrupted a tax conversation and when Rubio tried to stop him, he said, "You already had your chance, Marco. You blew it." As CNN notes, the fact that anyone even bothered to attack Christie shows he's still a contender, especially in the key primary state of New Hampshire.

7.  Other candidates were there too, I guess.

Jeb Bush, as usual, seemed like the only grownup in the room, but that doesn't get you that far. His performance was better than in past debates, and he slammed Trump's policy to temporarily ban Muslims from entering the United States, but his opponents generally dismissed whatever he had to say. Fellow grown-up John Kasich got some attention for saying, "we're going to win every state if Bernie Sanders is the nominee," but otherwise faded into the background.

Remember when Ben Carson was a legitimate contender? The neurosurgeon only got noticed for making a joke about falling asleep during the debate. Though he also attacked Internet comments sections for being too nasty, and if he adds banning Internet comments to his platform, he has my vote.