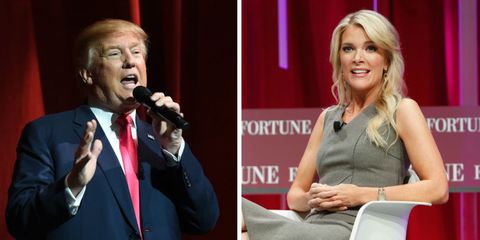 Fox News anchor Megyn Kelly is used to dealing with political opposites on live television. In fact, Tuesday night she went one-on-one with notoriously liberal Michael Moore. But it turns out she won't get a chance for a second round with one past rival: GOP presidential frontrunner Donald Trump. The New York Times reports that Trump has decided to boycott Thursday night's debate on Fox News because he doesn't think Kelly can be an unbiased moderator.

Back in August, Kelly slammed Donald Trump's past misogynistic comments during the first Fox News debate. Trump could not handle it, saying she had "blood coming out of her wherever" during the broadcast.  And apparently he hasn't let that go yet. Trump held a poll on his Twitter account and even asked people on Instagram to weigh in on whether he should take the stage Thursday night.

It turns out the answer was no, and Trump decided to bow out—but not without making some noise first. "Unlike the very stupid, highly incompetent people running our country into the ground, Mr. Trump knows when to walk away," the campaign said in a statement. "Roger Ailes and Fox News think they can toy with him, but Mr. Trump doesn't play games."

But Fox News didn't back down from their anchor, saying that Trump's own campaign manager had flat-out threatened her, echoing the threats to her safety she faced after her first debate. "Capitulating to politicians' ultimatums about a debate moderator violates all journalistic standards, as do threats, including the one leveled by Trump's campaign manager Corey Lewandowski toward Megyn Kelly," the network said in its own statement. "In a call on Saturday with a Fox News executive, Lewandowski stated that Megyn had a 'rough couple of days after that last debate' and he 'would hate to have her go through that again.' Lewandowski was warned not to level any more threats, but he continued to do so. We can't give in to terrorizations toward any of our employees."

"We learned from a secret back channel that the Ayatollah and Putin both intend to treat Donald Trump unfairly when they meet with him if he becomes president — a nefarious source tells us that Trump has his own secret plan to replace the Cabinet with his Twitter followers to see if he should even go to those meetings."

Trump hit back, tweeting that their statement "was a disgrace to good broadcasting and journalism. Who would say something so nasty and dumb?"  Trump, apparently, because he then tweeted that Kelly was a "bimbo" and a "lightweight reporter."

His closest competitor in Iowa, Sen. Ted Cruz, offered to debate him one-on-one, with a hand-picked moderator, but Trump hasn't stepped up to the plate yet. Instead of debating on television, Trump announced he will be hosting an event in Iowa to raise money for wounded veterans.