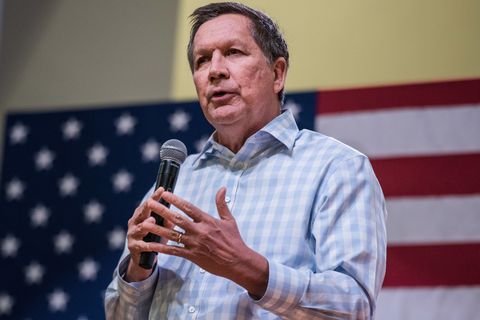 On Sunday, Republican presidential candidate and Ohio Governor John Kasich signed a bill that blocks his state from securing health services from organizations that perform or promote abortions, according to CNN.

Though Planned Parenthood isn't specifically named in the bill, the outlet reports that the effects of this law will defund the organization by more than $1 million, because Planned Parenthood does perform abortions along with its more common health and contraceptive services for women.

"This legislation will have devastating consequences for women across Ohio," Planned Parenthood President Cecile Richards said in a statement. "John Kasich is proudly eliminating care for expectant mothers and newborns; he is leaving thousands without vital STD and HIV testing, slashing a program to fight domestic violence, and cutting access to essential, basic health care."

Kasich, who has positioned himself as the moderate candidate among the Republicans, just finished fifth in the South Carolina primary, but has racked up important endorsements, including one from the New York Times.

A spokesperson for Kasich's office said this bill will move funds to other providers for pregnant women and newborns.

"The Ohio Department of Health has at least 150 other sub-grantees and contractors for the affected grants and projects addressing such issues as new born babies, infant mortality, expectant mothers, violence against women, and minority HIV/AIDS," a statement from his office said. "ODH will reallocate funding from ineligible providers under the new law to other currently eligible providers, ranging from local health departments and community organizations to hospitals and universities. These organizations will be required to submit proposals in order to receive funding."

Despite the continuing action against Planned Parenthood, most Americans oppose defunding the organization, according to a USA Today/Suffolk University poll released in December.

Kate Storey Esquire Writer-at-Large Kate Storey is a Writer-at-Large for Esquire covering culture, politics, and style.
This content is created and maintained by a third party, and imported onto this page to help users provide their email addresses. You may be able to find more information about this and similar content at piano.io
Advertisement - Continue Reading Below
More From Politics
Important 2021 Elections to Keep on Your Radar
Lisa Murkowski Hints She'll Vote to Convict Trump
Advertisement - Continue Reading Below
AOC Calls Out the Hypocrisy of "Blue Lives Matter"
All Your Qs About Biden's Inauguration, Answered
President Donald Trump Was Just Impeached, Again
Teleabortion: A Bitter Pill
Cori Bush Decries GOP Refusing Safety Protocols
AOC Thought She Was Going to Die Inside Capitol
Attorney General Letitia James Takes on the World
Can Trump Be Impeached After Biden's Inauguration?