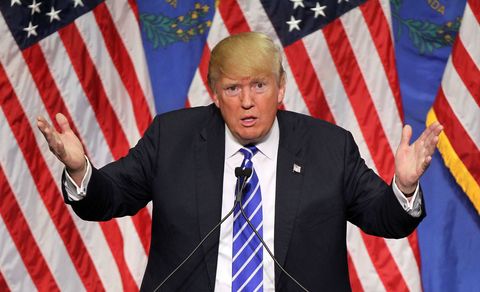 Here's the thing: When you, as a presidential candidate, call women doing their jobs "bimbos," and then say all the sexist things you ever said about women should be disregarded because, you know, you didn't know you were going to one day be running for office—there's probably already something wrong with your understanding of women and their worth. But paying them less for the same work men do? That's blatantly next-level.

In a new analysis by the Boston Globe, it's been revealed that Donald Trump's campaign pays its female staffers one-third less than their male counterparts. Trump's female staffers made an average of $4,500 in April while the men made nearly $6,100—or about 35 percent more. What's perhaps worse? Women make up only 28% of his total staff.

Clinton's staffers made less, overall, than Trump's staff, but were much more equal. The women working for Clinton (who make up 53 percent of her total staff) took home an average of $3,710. The men made slightly more, at $3,760.

Samantha Leal Senior Web Editor I'm Sam, the senior editor at MarieClaire.com.
This content is created and maintained by a third party, and imported onto this page to help users provide their email addresses. You may be able to find more information about this and similar content at piano.io
Advertisement - Continue Reading Below
More From Politics
How to Demand Justice for Adam Toledo
Daunte Wright's Death Sparks Protest in Minnesota
Advertisement - Continue Reading Below
41 Surprising Rules First Ladies Have to Follow
Asian American Women on Where to Go From Here
Syrian Journalists Reflect on a Decade of War
How to Show Your Support for the AAPI Community
Activist Lydia X. Z. Brown on Disability Justice
Elisa Crespo: "I'm Not Here to Make History"
What We Know About the Georgia Spa Shootings
Dianne Morales Has Never Listened to the Naysayers