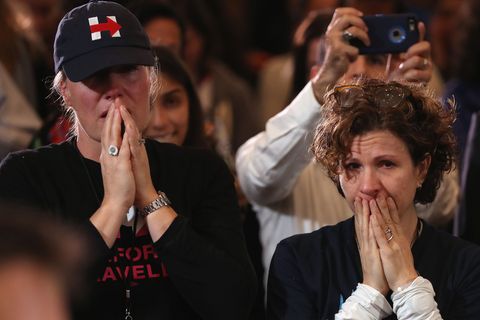 Confronted at the family Thanksgiving table with the question of what you're thankful for this year, you might have cringed. In light of Donald Trump's surprising presidential win earlier this month—and the hate crimes and controversial appointments that followed—it can feel like there's less to be hopeful for than fearful of. Especially when your Trump-supporting uncle is the one who's doing the asking.

Consider this news a salve: Today, a group of Hillary Clinton supporters took it upon themselves to remind her that she's what they're thankful for. That she's "an American hero" whose hard work will not be forgotten.

I was greeted by this heartwarming display on the corner of my street today. Thank you to all of you who did this. Happy Thanksgiving. -H pic.twitter.com/b69mW3Oqbf

Clinton tweeted a photo of the signs she found this morning expressing gratitude, and she returned the favor. So uh...anybody got tissues?

Jessica Pels Editor-in-Chief As the editor of Cosmopolitan, Jess oversees the editorial for all of Cosmo's efforts across print, digital, video, and emerging platforms.
Advertisement - Continue Reading Below
More From Politics
Marie Claire Wants You to Vote
The Ecowarriors Greenifying Big Tech
Advertisement - Continue Reading Below
Who Is Andrew Cuomo's Ex-Wife Kerry Kennedy?
How Planned Parenthood Is Responding to COVID-19
British PM Boris Johnson Has Coronavirus
Fear Is a Virus
COVID-19 Exposes the Dangers of Gender Inequality
“I’m Homeless—How Can I Self-Quarantine?”
Will the Conventions Be Canceled in 2020?
Rep. Katie Porter on Being an Effective Politician