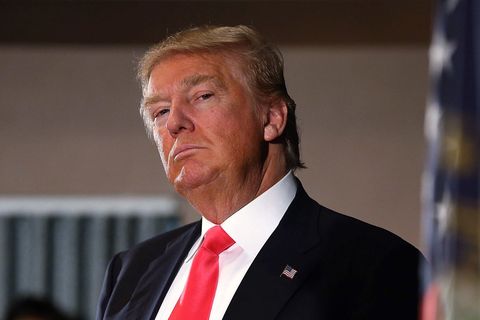 It's no secret that Donald Trump doesn't exactly have the most diplomatic approach when it comes to Twitter. The president-elect has established a bad reputation on the social media site for his late-night Twitter rants, offensive and inflammatory statements and generally outrageous behavior. (There's a reason his aides took control of his account in the final week before the election…) And despite his promises to tone down the Twitter tirades once he was elected, Trump continues to stir up controversy with every 140 characters.

It's also no secret that Donald Trump doesn't take kindly to criticism, which he receives in abundance on Twitter due to the aforementioned nature of his posts. His solution? Block them all.

It appears the future leader of our nation found some time recently to block people who criticize or disagree with him. A number of Twitter users, realizing they had been restricted from viewing his account, began sharing screenshots of Trump's inaccessible profile.

Many have found humor in the situation, making jokes or even boasting about their new blocked status.

Well, I've finally made it. @realDonaldTrump blocked me on Twitter. I'm not one to brag, but this feels good. pic.twitter.com/OLzedT4R8E

While others were less flippant, seeing it as an unsettling, if not alarming, action for the future president to take.

I've been joking all this time about being blocked by Trump but now I just realized I really am blocked by the next President... pic.twitter.com/r9ltg1ag34

I have been BLOCKED by Donald Trump. Propaganda as a Fascist tool starts with controling the narrative. @realDonaldTrump allows no dissent.

@realDonaldTrump blocked me
Why?

Congratulations Sir.
....in the voice of @HillaryClinton
We pray you be a better president pic.twitter.com/JMz3X9zS5A

Do we really want a President who can't handle criticism to the point he blocked a cat on Twitter? #Trump2016 pic.twitter.com/frJMXFfaQH

Sarah Lindig Senior Digital Editor, Special Projects Sarah Lindig is the senior digital editor, overseeing special projects for Harper's Bazaar.
Advertisement - Continue Reading Below
More From Politics
Everything We Know About Senator Warren's Husband
Mayor Pete's Husband Would Be a "First Gentleman"
Advertisement - Continue Reading Below
How a Parkland Mom Turned Her Grief into Action
He Voted for Trump. She Voted for Bernie.
How Guerrilla Feminists Are Fighting Femicide
Who Was Mayor Pete's Father, Joseph Buttigieg?
Nancy Pelosi, Icon, Ripped Up Trump's SOTU Address
Thoughts From a First-Time Caucus-Goer
And Now, a Word From the Future Voters of Iowa
Ayanna Pressley Wants Total Justice for Survivors