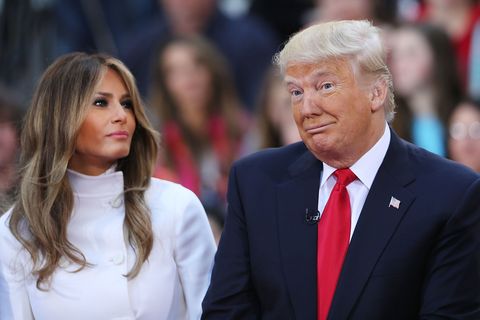 When an average human tweets something they regret, it's not a big deal if they delete it. When the tweeter in question is the President of the United States though, it's a little more complicated.

On Saturday, Donald Trump tweeted about his excitement to take office. It was a nice tweet, but with a potentially-embarrassing typo. The POTUS misspelled "honored."

Trump realized the mistake and, like many people would, he deleted the tweet and re-tweeted with the typo fixed, according to The Hill (the corrected tweet has also since been deleted). Now that he's the president though, tweeting and deleting could be a legal issue.

As Mic reports, the Presidential Records Act of 1978 requires the president to obtain "views of the Archivist of the United States" before disposing of records. In the digital age, presidential tweets are a public record. But, since the tweets in question were sent from Trump's personal account and not the @POTUS account, it's unclear if they're covered by the PRA.

We'll have to wait and see how tweets, particularly those sent from Trump's personal account, are treated going forward.

Kayleigh Roberts Kayleigh Roberts is the weekend editor at Cosmo, focused on celebrity news and royals.
This content is created and maintained by a third party, and imported onto this page to help users provide their email addresses. You may be able to find more information about this and similar content at piano.io
Advertisement - Continue Reading Below
More From Politics
In Conversation With Secretary Granholm
Laphonza Butler on What's Next for EMILY's List
Advertisement - Continue Reading Below
Anita Hill Believes We Can End Gender Violence
For Teachers, Going to Work Can Mean Life or Death
Want to Help Moms? Prioritize Menstrual Equity
Abortion Rights Start at the State Level
All of Your Abortion Questions Answered
The Texas Abortion Snitch Site Is Having a Bad Day
The Future of Afghan Women Depends on Us
How You Can Help People in Afghanistan