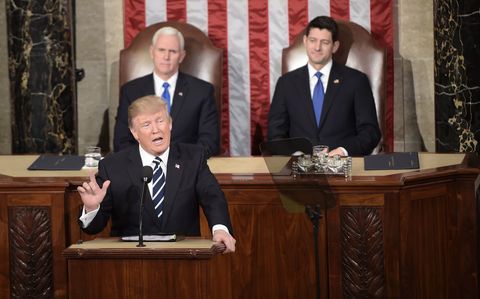 President Trump made his first address to a joint session of Congress on Tuesday night, and his message took a different tone than his usual rhetoric. He frequently called on Democrats and Republicans to unite behind his policies. Some subjects elicited applause from both sides of the aisle (see: veterans affairs, infrastructure spending), but, since many of POTUS's goals are already proving quite divisive, there was also some very noticeable dissent.

Here, the six times Trump was audibly booed during his speech:

As soon as he was introduced

#Democrats sit down as @realDonaldTrump enters #Jointsession. Boos can be heard! #AddressToCongress #JointAddress

When he claimed his administration was "draining the swamp" of corruption, even when that's likely not the case:

When he called on Congress to repeal and replace Obamacare:

"Tonight, I am also calling on this #Congress to repeal and replace #Obamacare." - @POTUS #TrumpAddress #Jointsession #Jointaddress pic.twitter.com/6rK4zK6pFC

Repeal and replace with what? Are this boos? #Jointsession #jointaddress I guess so pic.twitter.com/9QoeCQa9Bj

When he talked about building "a great wall on our southern border:"

Mentions the Wall. Half of Congress boos. And for good reason. It's expensive and unnecessary.#JointSession

@POTUS says construction will soon begin on the wall. Half boos, half applause. #Jointsession

When he talked about restarting construction on the Keystone and Dakota Access pipelines:

President Trump on Keystone and DAPL pipelines: Construction of the pipelines is "creating tens of thousands of jobs." #JointSession pic.twitter.com/GimpFvAv6J

And when he announced a new office, VOICE, Victims of Immigration Crime Engagement, a move that critics found offensive and even racist:

"I have ordered the Department of Homeland Security to create an office to serve American victims," President Trump tells #JointSession pic.twitter.com/TuUqGKesuj

Can't believe there were boos when he said this. #Jointsession #maga https://t.co/5iGE6g3VAH