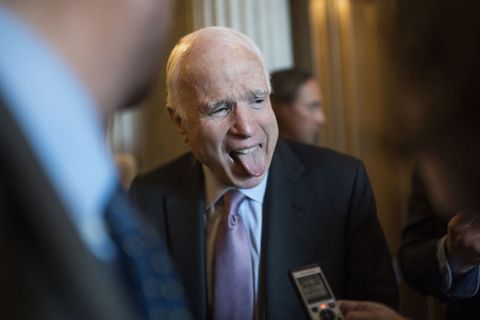 Today's Senate hearing of former FBI Director James Comey provided a treasure trove of blockbuster revelations, memes, jokes, and strange moments. Yes, Comey repeatedly said he was scared of the president of the United States and his tendency to lie, but LOLZ, amirite?

One of the oddest moments of those two hours and 40 minutes was Sen. John McCain's line of questioning for Comey. When it was his turn, the Arizona senator seemed disoriented, asked rambling questions, and even mixed up "Trump" and "Comey." Twitter, of course, came in hot with the jokes but there was definitely some concern mixed in there: is the 80-year-old senator doing okay?

Within a few hours of the open session's ending, McCain released a statement explaining away his perplexing appearance. "I get the sense from Twitter that my line of questioning today went over people's heads. Maybe going forward I shouldn't stay up late watching the Diamondbacks night games," he said.

"What I was trying to get at was whether Mr. Comey believes that any of his interactions with the President rise to the level of obstruction of justice," he continued. "While I missed an opportunity in today's hearing, I still believe this question is important, and I intend to submit it in writing to Mr. Comey for the record."

Yeah, you could say it's an important question, Senator McCain. But in the mean time, whoever is ghostwriting your dad jokes definitely deserves a raise.