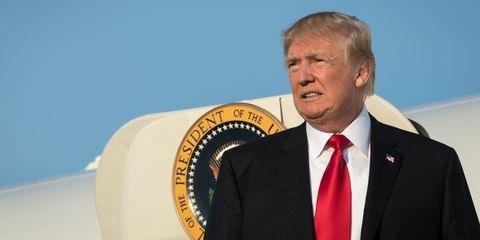 According to CNN, women in the White House are still experiencing a pay gap. Apparently, the pay gap means that women are earning around 80 cents for every dollar their male counterparts make. As CNN reports, that's actually a wider pay gap than across the country, with the national average apparently standing at 82 cents to the dollar.

To establish that there was a gender pay gap in the White House, CNN analyzed the salaries of the majority of staff working there. Apparently, the average wage of a male employee in the White House is around $104,000, whereas a female employee is more likely to earn around $83,000. That's a gap of $21,000 per annum, which is pretty dramatic.

According to the data, one of the main reasons that women are earning less in the White House is due to the fact that they're employed in lower-ranking jobs. In order for the pay gap to close, women need to be given more access to higher-ranking jobs that carry salary increases with them.

Despite the pay gap, the staff in the White House are fairly evenly split between men and women. Out of 359 regular employees, 47 percent are women, and 53 percent men. Hopefully CNN's analysis will go some way towards instigating change.

Amy Mackelden Amy Mackelden is a freelance writer, editor, and disability activist.
This content is created and maintained by a third party, and imported onto this page to help users provide their email addresses. You may be able to find more information about this and similar content at piano.io
Advertisement - Continue Reading Below
More From Politics
Gwen Berry: Athlete, Activist, Olympian
The Anti-Choice Endgame: Power And Control
Advertisement - Continue Reading Below
Give Domestic Workers the Protections They Deserve
Kristin Urquiza Wants Justice for COVID-19 Victims
A Breakdown of VP Harris's Net Worth
WH Announces Removal of the Hyde Amendment
What Liberation Means This Juneteenth
Kathryn Garcia: It's Time to Step Up or Shut Up
A Valedictorian Speaks Out Against Abortion Bans
Standing Between Care and Violence