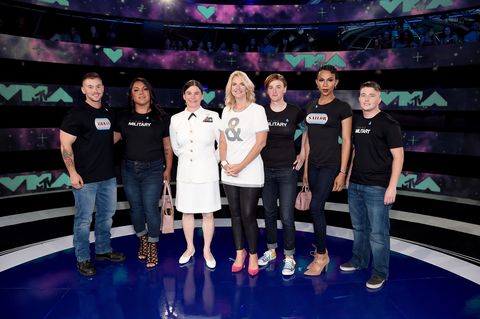 For Sunday night's Video Music Awards, MTV invited transgender members of the military and transgender veterans to walk the red carpet, making a big statement against President Trump's decision to ban them from the armed forces.

According to GLAAD, MTV invited the service members and veterans after President Trump announced he was working on banning them from serving in the U.S. military. "MTV continues to be a pioneer and fierce advocate for the LGBTQ community by giving one of the most visible platforms to voices that need to be heard," Ellis said in a statement. "Throughout all the tweets, memos, and speculation, brave transgender Americans are still serving their country and defending the freedoms of this nation while meeting the same rigorous standards of their peers. We are proud to stand with them."

In a series of tweets on July 26, President Donald Trump said he would reinstate a ban on transgender troops."The United States government will not accept or allow transgender individuals to serve in any capacity in the U.S. Military," he wrote. On Friday, Trump officially issued a directive to the Pentagon to cease recruitment of transgender people into the military and to stop paying for current transgender troops' medical care. It's unclear as of now if troops currently serving will be forced to leave active duty.

Kate Storey Esquire Writer-at-Large Kate Storey is a Writer-at-Large for Esquire covering culture, politics, and style.
This content is created and maintained by a third party, and imported onto this page to help users provide their email addresses. You may be able to find more information about this and similar content at piano.io
Advertisement - Continue Reading Below
More From Best of the Red Carpet 2021
Alan S. Kim Channeled David Rose at the Oscars
The Best Red Carpet Looks at the 2021 Oscars
Advertisement - Continue Reading Below
The Best-Dressed Celebs at the 2021 SAG Awards
The Best Red Carpet Looks at the 2021 Grammys
The Chicest Golden Globes Looks From IRL and Home
50 Celebrities on Their Very First Red Carpet
The Best Looks of the Oscars After-Parties
Did You Spot Charlize Theron's Hidden Hair Detail?
Timmy Photobombed Margot on the Oscars Red Carpet
Leonardo DiCaprio's Oscars Date Is...Not His Mom