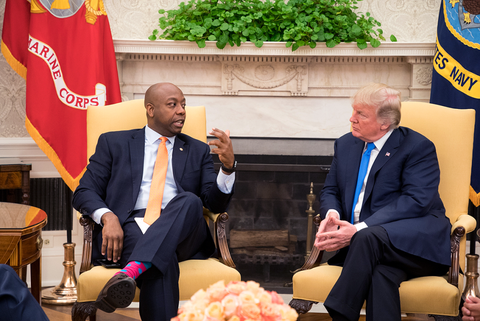 Female politicians get criticized for what they wear on near daily basis. But because men tend to stick to plain old suits—and, oh yeah, because of institutionalized sexism—male politicians usually don't get that kind of flak. Steve Bannon's simultaneous multiple button-down shirts (see below) have recently helped shatter that glass ceiling, and now Trump is here to officially break through.

On Wednesday, the White House released a photo of President Trump meeting with Senator Tim Scott of South Carolina. The meeting was about race relations in America (and was a high-profile photo opp to, no doubt, attempt to clean up Trump's post-Charlottesville record), but onlookers were distracted by Trump's choice of attire: a navy blue suit jacket with black slacks. Seemingly from a different suit.

🔥NEW!!! During a meeting with Tim Scott, Trump wore a blue suit jacket with black suit pants, completely unaware of the error he made. pic.twitter.com/03ccsHrixf

Just remembered that Trump wore a navy jacket with black suit pants yesterday and got angry all over again.

petty tweet: obama wore a tan suit & got dragged by the crusties at fox news yet trump wore a navy jacket & black pants SO HELP ME GOD!!! pic.twitter.com/LveMmY6U17

This isn't the first time Trump has been dragged for his style choices. For one, his ties have been criticized for being too long and even for being attached with Scotch tape. And of course, the man's hair has been a subject of ridicule for decades.

Does today's new faux pas mean we get to move on from Tan Suit Gate now?