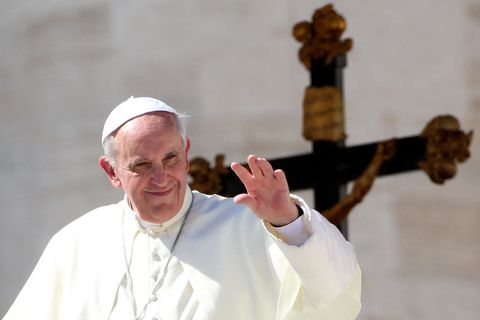 Even the pope wants to change the conversation on women's rights.

In his first lengthy interview published in Jesuit journals in 16 countries, Pope Francis urged for the Catholic Church to hone its message with "a new balance" on topics including abortion, contraception and same-sex marriage.

"The church's pastoral ministry cannot be obsessed with the transmission of a disjoined multitude of doctrines to be imposed insistently," he said. "We have to find a new balance; otherwise even the moral edifice of the church is likely to fall like a house of cards, losing the freshness and fragrance of the Gospel."

Francis' tone marks a significant shift in the Vatican's message on such issues to date. Francis argued for the church to consider broader, sweeping issues rather than focus on what he called "small-minded rules." He added that ministers "must be ministers of mercy above all." While he did not advocate for reform on the church's stance towards women's rights and same-sex marriage, saying he agreed with doctrine, he did push for a reform first in "attitude." He said the church should not "interfere spiritually" in the lives of gay and lesbian individuals.

Though perhaps the most dramatic shift from his predecessors, Francis' comments are just the latest in a string of differences the pope has adopted since the conclave. Francis opted to live in the Vatican guesthouse instead of the papal apartments. He also broke tradition when as his first act as pontiff, he asked a crowd of more than 100,000 gathered in St. Peter's Square to pray with him, rather than him blessing the crowd. When a cardinal living in Buenos Aires, he rode on public busses rather than in limousines. And when the conclave selected him, he took the time to personally call the newspaper kiosk owners in Buenos Aires where he received his morning paper to let them know that he was moving and needed to cancel his newspaper subscription.