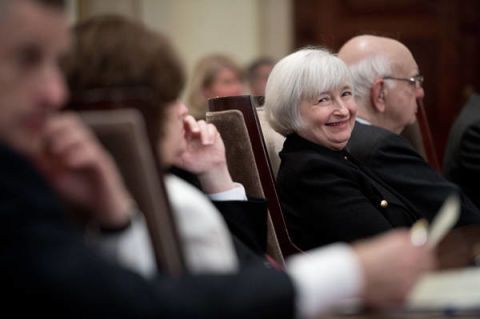 Who runs the world? Janet Yellen. Yesterday the Senate confirmed Yellen, 67, as the new chairperson of the Federal Reserve. She succeeds Ben Bernanke, who she has served under as vice chair since 2010. She's also the first woman to serve as Fed Chair in the central bank's 100-year history.

Prior to her position at the Fed, Yellen served as chair of the Council of Economic Advisers under President Bill Clinton and as president and CEO of the Federal Reserve Bank of San Francisco from 2004 until President Obama nominated her to the position of vice chair.

Even though we'd hate to make the rise of such a qualified person all about gender, it's worth noting that her confirmation is especially worthy of celebration because, as the Washington Post's Ezra Klein wrote earlier this year, there was a subtle, sexist whispering campaign waged to keep her from getting the nomination. Klein says Yellen was often talked about as highly qualified and very knowledgeable on monetary policy, but lacking "toughness" and "gravitas" and other characteristics that tend to be more rewarded in men than women, and thus more prevalent among men than women. And since every Fed Chair in history has been male, having those characteristics has become a defacto prerequisite, even though Yellen is abundantly qualified for the role for other reasons.

Thankfully, Yellen triumphed over the haters—thanks in part to the overwhelming support from more than 450 economists, who submitted letters to President Obama urging him to nominate her for the position. (According to the Huffington Post, some credit is due to the organizing efforts of groups like the National Organization for Women and a progressive women's group called Ultraviolet that gathered signatures, asked people to call Congress and launched a public education campaign to highlight Yellen's qualifications.)

She takes the position at a pivotal time for the central bank, which has begun to taper its bond buying program known as quantitative easing as the U.S. economy continues to recover. Her first meeting as Fed Chair is scheduled for March.

Kayla Webley Adler Deputy Editor Kayla Webley Adler is the Deputy Editor of ELLE magazine.
This content is created and maintained by a third party, and imported onto this page to help users provide their email addresses. You may be able to find more information about this and similar content at piano.io
Advertisement - Continue Reading Below
More From Politics
Kristin Urquiza Wants Justice for COVID-19 Victims
A Breakdown of VP Harris's Net Worth
Advertisement - Continue Reading Below
WH Announces Removal of the Hyde Amendment
What Liberation Means This Juneteenth
Kathryn Garcia: It's Time to Step Up or Shut Up
A Valedictorian Speaks Out Against Abortion Bans
Standing Between Care and Violence
Seeking Healing a Century After the Tulsa Massacre
What to Know about Texas's Abortion "Trigger Ban"
A New Book Invites Us to Rethink Menstrual Equity