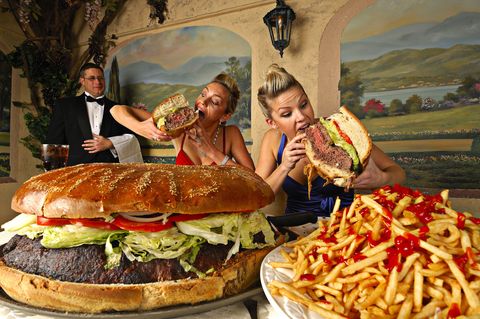 Somewhere in South Korea, my spirit lady friend, Park Seo-yeon, is living out my dream job— aka she's getting paid to eat massive, elaborate meals in front of a camera, according to Uproxx via Jezebel. It's a little odd there's a slew of people who tune in to watch, but I really just want to give her a virtual high five: Seo-yeon is getting paid more than $9,000 a month to eat the most delicious looking food I've ever seen in my life.

Seo-yeon, also known as "The Diva" is a part of the latest craze in South Korea called "gastronomic voyeurism." She prepares meals and then broadcasts herself eating for up to three hours a day. Users then send her bitcoin-esque virtual balloons that can be converted into money. Seo-yeon had to quit her full time job at a consulting job.

According to Seo-yeon in a video interview with Reuters, "People join the vicariously pleasure with my show when they can't eat that much, or they can't eat food at night, or are on a diet."

One viewer provides this explanation about why there are so many people tuning in, "It feels as if I'm eating that much food with her. I think that is what the show is about. It is probably comforting for people that eat alone."

I calculated it out: $9,000 dollars would take care of my groceries for roughly four years — maybe this way of life is the best way to put food on the table. Pun intended.

The History of Tattoos

5 Iconic Bobs That Have Made History

The 5 Sexiest Hairstyles Ever