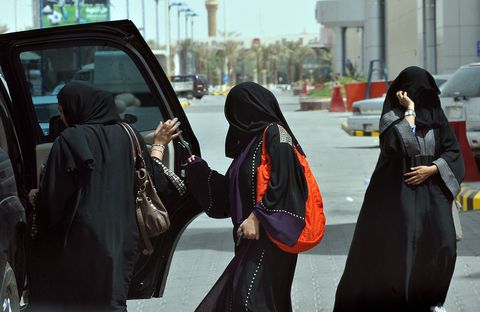 Conditions for women around the world vary greatly, from seemingly utopic conditions for females in Scandinavian nations to huge pay gaps and rampant abuse in the nations in Middle East, South America, and Southeast Asia. But what makes things bad for women in these nations? Outdated, sexist laws that enforce this kind of treatment. We've rounded up 9 of the most outrageous laws that discriminate against women, with a bonus five that exist on American soil.

1. Perhaps one of the best-known injustices against women around the world is Saudi Arabia's infamous refusal to issue driver's licenses to the country's female population. But that's not all: Women still don't have the right to vote in this Middle Eastern country.

2. 'Til death do us part takes on a whole new meaning in the Philippines: Divorce is illegal. The Asian nation is one of the last countries to hold onto this outdated law.

3. The tiny, male-dominated nation of Vatican City has something in common with the first two listed: It's illegal for women to get divorced, as well as vote.

4. For Turkish women seeking employment, they are in for some roadblocks: It's illegal for women in Turkey to hold a job without their husband's permission. The antiquated law has repercussions: only 29 percent of women in the country are employed. The mistreatment continues after a marriage ends, as well: they also must forfeit the couple's jointly held assets in the case of divorce.

5. If you're in a financial bind, offering up valuables as collateral is standard procedure. But in certain regions of India, a man can offer his wife as collateral until his debts are paid.

6. Yemen has repeatedly been named the worst country for women—in the world. And is it any wonder, when women in Yemen can't leave the house without their husband's permission?

7. Women in Swaziland are forbidden from wearing pants. Dresses and skirts are great and all, but a life without jeans? Leggings? That's just cruel.

8. In Afghanistan, a recently introduced law has made it nearly impossible to prosecute domestic abusers. Now, relatives of an accused party are banned from testifying against them. This has a big impact on cases of violence against women, which usually happen within a family/domestic setting.

9. Minimum ages for marriage differ from boy to girl in many countries, such as Guatemala, where girls can marry as young as 14, but boys at 16. Sexist laws such as Guatemala's make it easier for girls to be forced into marriage at a young age.

But it's not just international laws that discriminate against women. We've got a few mind-boggling laws of our own here at home. Here are five laws stateside that are perhaps a little less severe, but equally as ridiculous.

1. In Arkansas, it is legal for a man to beat his wife—but only once a month.

2. If you're a resident of Michigan, don't head to the salon so quickly—women here can't cut their hair without their husband's permission

3. In Dyersburg, TN, it is illegal for a woman to call a man while on a date. That's one way of enforcing a phone-free evening.

4. Women in Vermont must have permission from their husbands to wear false teeth.

5. Hair care is serious business in Oklahoma—women must be licensed to do their own hair.

The States That Have the Biggest Pay Gap for Women

Why You Should Care About Equal Pay

Want to Find Out What Your Co-Worker's Make?

The Real Reason Why Companies Don't Want to Pay You Fairly

Diana Pearl Producer Diana is a producer at ELLE.com.
This content is created and maintained by a third party, and imported onto this page to help users provide their email addresses. You may be able to find more information about this and similar content at piano.io
Advertisement - Continue Reading Below
More From Politics
Senator Hirono on Her New Memoir 'Heart of Fire'
How to Demand Justice for Adam Toledo
Advertisement - Continue Reading Below
Daunte Wright's Death Sparks Protest in Minnesota
41 Surprising Rules First Ladies Have to Follow
Asian American Women on Where to Go From Here
Syrian Journalists Reflect on a Decade of War
How to Show Your Support for the AAPI Community
Activist Lydia X. Z. Brown on Disability Justice
Elisa Crespo: "I'm Not Here to Make History"
What We Know About the Georgia Spa Shootings