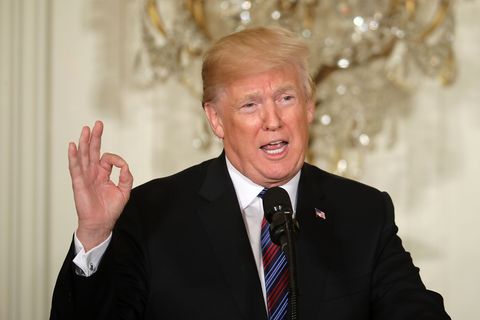 It’ll be a cold day in hell when I feel bad for Donald Trump about anything, but being President really does sound like the pits. It’s long hours of rigorous work, a lot of meetings, constant blame for everything, and you have to wear a suit the whole time. In fact, elected presidents tend to have shorter lifespans on average than their political opponents. (Finally, some good news for Hillary Clinton.)

Rolling Stone points to a clip from Thursday’s Morning Joe in which co-host Mike Brzezinski reveals the following tidbit:

Not even for stress relief?! Rolling Stone reached out to Trump’s press secretary for comment on whether this is actually true (for what it’s worth, I couldn’t find anything definitive about it online), but let’s for a moment assume it is. That’s messed up! This president in particular could totally benefit from an informational porn-viewing experience—something feminist that would teach him how to respect ladies and not grab them without their consent.

A take on the hella problematic 1972 Marlon Brando movie, Last Tango in Paris. In fact, let’s agree as a society to make this the de facto one and add the Brando version to the growing list of Cancelled Man Things.

Basically Anything from Lust Cinema

It's about time Donald Trump learned that females have gazes, too.