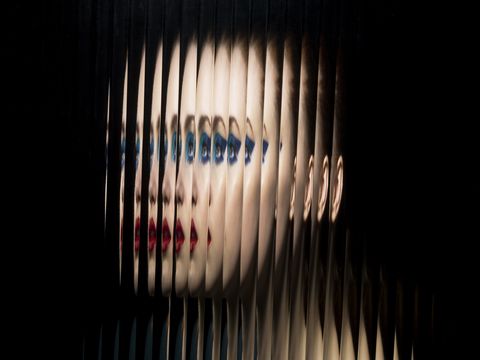 I went to high school with a girl—let’s call her June. We weren’t friends. She was kooky, strange, and I was much too busy striving to maintain a guise of natural popularity to cross the boundary of our differing social circles. But I admired her from afar. June seemed fearless in ways I could never be, daring and comfortable in her own skin. She hung out with the artsy kids and was preternaturally good at drawing and photography. I would surreptitiously marvel at her work across the art room, from where I sat uneasily at the dispassionate table of jocks and cool kids.

June had long brown hair that she could twist into endless shapes atop her head and hold in place with a pencil—that is, until she shaved her head and got a nose ring. She had a personal style that consisted of thrift-store slip dresses and vintage boots, except on the days when she’d show up to school wearing a pressed men’s button-down and necktie, or a tuxedo jacket, or a torn flannel and Kurt Cobain sunglasses. Sometimes June dated boys. Sometimes June dated girls. She’d make out with either in the hallway between classes.

Stability isn’t our birthright, though when you’re young it can seem like it is.

June terrified me as much she intrigued me. Her fluidity made me nervous. Now, with the benefit of a hindsight view of my life—it would be a few more years before I shaved my own head and started kissing girls in public—I can understand how there was something personally destabilizing for me about June. How whatever June did on a given day, or what she wore, or who she was dating—it was never the sole thing that defined who June was. This is a concept to which it would take me nearly a decade to grow accustomed.

Self-definition feels like something we should all strive for. To be defined is to be stable, to have arrived somewhere solid and sure. To be in process is to be unfinished and therefore imperfect. One implies confidence, the other suggests uncertainty. For this reason, in the years of my life since high school, I’ve tried on a multitude of definitions. Not only in regard to my sexuality and gender (am I a lesbian, bisexual, transgender, a gay man in a gay woman’s body?), but in regard to all aspects of my identity (maybe I should be a Buddhist, or quit my city job and move to the country to become a farmer?).

I’m now a fully-grown adult and I’ve yet to encounter a label that suits me just right, that can sufficiently incorporate my varying moods and tastes and the ways different people bring out different aspects of myself. Part of the beauty of being a human being is our ability to evolve. Stability isn’t our birthright, though when you’re young it can seem like it is.

When I started writing my novel When Katie Met Cassidy, I thought about June. There just aren’t that many characters like June out there—characters who are difficult to pin down with a single definition and cannot be contained by any one label; who are more about what they do than who they are. Characters who might easily abide by contemporary social and moral codes one day and completely flout them the next. So often in the books we read and the media we consume we see characters who are already processed—rather than in the act of processing. Media often relies on clichés, tropes, and tokens. And too frequently when we’re presented with LGBTQ characters, they are stereotypes rather than multidimensional people. I wanted to push against that.

In my book, one woman is clear about what she wants and who she is, while the other is separating herself from the labels that have defined her in the past. Cassidy is a gay, promiscuous, gender-nonconforming native New Yorker, who is entirely unapologetic about the way she chooses to live her life. Katie cares more about what other people think of her. She grew up with a strong set of traditional values. Until meeting Cassidy, Katie never considered sleeping with a woman, and as she is drawn closer and closer to Cassidy, she begins to look at herself through new eyes, to reevaluate not only her past relationship decisions but also how she lives her whole life.

Too frequently when we’re presented with LGBTQ characters, they are stereotypes rather than multidimensional people.

The most vibrating thing, for me, about Katie is that when she meets Cassidy, she allows herself to drift from who she thinks she’s supposed to be. She doesn’t lock herself into being or staying one way. Cassidy also begins to shift, rethinking her stance on monogamy and love.

So often in society we look at people as one thing or the other. Man or woman, gay or straight, out or in the closet. But the reality—the truth—is that the plates are never not shifting. The notion of “born this way” is important, but what about becoming this way? What about everything that happens between who we began as and who we end up being? You can be born a certain way and still require years of life experience to determine how you want to express yourself as that person.

I think about June a lot. It would be easy to say she was being brave, when she was really just being herself. That’s something I tried to get at in this novel—that it’s not always about taking a stand; that it’s okay to step forward and back. We learn; we change our minds. We are not always anyone’s hero. We’re just living our lives.

It’s the in-between that’s interesting—the messy stuff. It’s the grey area that makes characters in books feel real. Because that’s the stuff that mainly makes up actual life. It’s important for readers to encounter characters like this so that they can feel okay in the fact that they’re still figuring out who they are, too.

Camille Perri is the acclaimed author of The Assistants. Her latest novel, When Katie Met Cassidy, hits shelves on June 19 and is available for pre-order now.