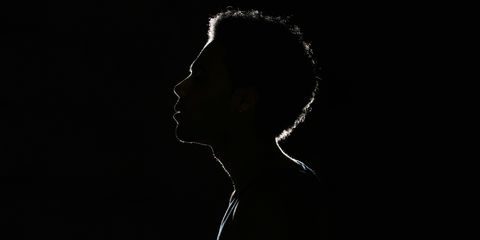 Steve* and I had been dating for six months when I found myself alone in his apartment, watching snowflakes whirling in and out of the red-orange light of the giant, neon New Yorker hotel sign that blazed outside his bedroom window. He had gotten last-minute tickets to a basketball game and was running late to meet me, but he'd called earlier to tell me that his roommates would let me in and that I was welcome to use his laptop while I waited.

My plan, as I opened the computer, was to look for secondhand furniture on Craigslist. When I got to the website's home page, most of the links were blue, signifying that they'd never been clicked on. But under the Personals heading, the words "Casual Encounters" were purple. As in, previously visited.

That was an innocent discovery. The not-so-innocent one came next, as I weighed my options. I'd always been anti-snooping—even people in relationships deserve their privacy—but if Steve had been casually encountering other girls all this time we'd been together, how could I not investigate? What if a silent STD was ravaging my reproductive system while I sat there debating the ethics of looking through my boyfriend's browser history?

"My first befuddled thought, as I squinted at the tiny thumbnail photos, was that I'd uncovered a giant, secret stash of pictures of pink rocket ships."

Once I clicked on the history, it took me less than a minute to find what I was looking for. That afternoon, the laptop had been used to visit a Hotmail account I'd never heard of, and someone had sent an attachment with the curious file name "NakedSteve.jpg." I searched the laptop for that file and found a folder. There were hundreds of images in it.

It's a testament to how totally unprepared I was for any of this that my first befuddled thought, as I squinted at the tiny thumbnail photos, was that I'd uncovered a giant, secret stash of pictures of pink rocket ships. My second thought was that if Steve wasn't cheating on me, then he was almost certainly gay. Whatever his reason for having that many dick pics on his hard drive, it couldn't be good.

I called him immediately. When he answered the phone, the roar of the crowd at Madison Square Garden nearly drowned out his hello. "You need to come home right now," I said. He must have guessed the reason why, because all he said was, "OK."

I didn't find out the whole truth that night. Yes, Steve said, he'd visited Craigslist's Casual Encounters, but only because it was funny. The dick pics? A prank by his roommates. And the secret e-mail account? "It's not mine! I can't even get in!" he exclaimed, rapidly typing and then showing me an error message: Your Password Is Incorrect. There were real tears in his eyes as he swore that it was all a crazy misunderstanding. He would never lie to me. I had to know that, didn't I?

"I couldn't unknow what I knew: I was being lied to."

It was my first experience with the "It wasn't me!" defense, and, incredibly, I found myself nodding along. I told him I loved him, which I did, and that I believed him, which I didn't—but thought I might be able to if given time. I would just convince myself that despite the evidence, his version of events was the truth, the way some people choose to believe in a 10,000-year-old Earth.

As it turns out, faith is not my strong suit. Despite my determination to move on and Steve's attempts to gaslight me ("You're killing our relationship with your mistrust," he said, when I tried to discuss it again a few days later), I couldn't unknow what I knew: I was being lied to. The knowledge made me crazy. We fought constantly over the next month, as I became a person I didn't recognize: paranoid, suspicious, fearful, miserable, and as desperate to learn the truth as I was to pretend it didn't exist.

Finally, I hacked into the Hotmail account and read every single message with a mix of fascination and horror. At any given moment of our six-month relationship, my boyfriend had been juggling half a dozen e-mail exchanges with different women, describing to each one, in wildly lascivious detail, what he was going to do to her with his throbbing, giant NakedSteve.jpg.

Some of the threads went on for weeks, the conversation evolving from graphic sexual scenarios to mundane hellos and how-was-your-days, then veering off again into X-rated territory. Sometimes he told them his real name and sent photos of his real junk; sometimes he used a pseudonym and a picture of someone else's penis. Occasionally, they'd dance around the possibility of meeting up. As far as I could tell, the cheating never crossed the line into meatspace. No dates were made; no addresses were exchanged; none of these women ever touched Steve's body—or even saw his face.

I couldn't understand it. I knew that there were people out there who lived secret lives on the Internet, but I'd always assumed that those people did it because they had to. Because they were lonely, unwanted, iso- lated, friendless, and (most especially) sexless. Steve was none of those things. It wasn't just that he was cute and successful, with good friends and a loving family. It was that he was a nice guy—bland, amiable, even a bit boring. He was the guy people described as "husband material." He was safe. It was why I was dating him; our relationship wasn't exciting, but it was refreshingly free of unpleasant surprises. How could this guy, of all guys, be a secret, serial catfish?

I was desperate to understand, and so I begged Steve for honesty and promised I wouldn't judge him. I asked him to explain to me why I shouldn't feel betrayed. But his response was always the same. "It's none of your business!" he would scream, refusing to meet my eyes. "It was a fantasy!"

It took me longer than it should have to realize what he meant by "fantasy." The boyfriend I knew only ever wanted sex in the missionary position; he would shush me if I made too much noise. The guy in those e-mails, by contrast, was confident, arrogant, and fantastically filthy. I would have liked to meet him. "You could have told me," I said. "I would have exchanged sexy e-mails with you."

His look of horror said it all. "You're my girlfriend," he said. "I can't use that kind of language with you." I didn't know whether to laugh or scream. I was furious because I felt cheated-on and his admission seemed to give me proof. But it was almost comical: For Steve, the women didn't matter at all. He didn't want to be with someone else; he wanted to be someone else.

"For Steve, the women didn't matter at all. He didn't want to be with someone else; he wanted to be someone else."

Shortly after that realization, I ended the relationship. Partly because of the lies, but more so because of the truth: This was why Steve had always seemed so uncomplicated. The nice-guy persona I'd found so comforting was nothing but a mask, a cover for a man whose discomfort with himself ran so deep that he couldn't bear to confront it. In the e-mails he sent me after our breakup, Steve bemoaned that he'd "ruined" me. He was sure that I'd spend the rest of my life bitter, fearful, and deep-combing every future boyfriend's hard drive for a secret stash of dick pics. In low moments, I wondered if he was right.

But in the weeks that followed, I discovered that just as Steve was never truly himself with me, I hadn't been myself with him, either. Before I got the idea of settling for a "safe" romance, I had been a girl who trusted easily, fell hard, and braved heartbreak because I knew from experience that I could handle it. Somewhere in the choice to be with Steve, I'd lost that fearlessness. When I left him, it came roaring back, along with the realization that I didn't want a nice guy. I wanted someone sharp, smart, passionate, and confident—and genuine and vulnerable. As it turned out, I already knew that man. We'd met at a corporate softball game months earlier and had become close friends since, bonding as much over our friendly disagreements as our shared love of baseball and books.

I married him the following year. I had never met anyone who made me laugh as hard, feel as loved, or think as deeply—and I understood, in a way I hadn't before, that those things made us a surer thing than any safe choice ever could. My nice-guy boyfriend turned out to be a self-loathing liar, and my attempt at a predictable romance turned out to be a farce. But I remain grateful for what it taught me: that a true connection, the kind worth having, can be complicated and messy, but it is, above all else, real.

*Name has been changed. This article appears in the November issue of Marie Claire, on newsstands now.