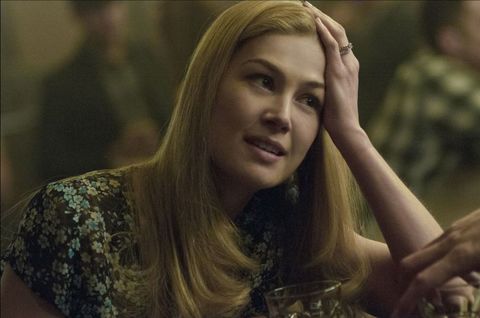 The other day a friend sent me the quote above and asked, "Do guys really want the Cool Girl?" The short answer is "yes" and also "no." Let's break up the definition of the "Cool Girl" and see how many of these things actually matter to men.

There is a massive assumption that all men desire a woman with whom they could bro-out. The woman who not only knows the ins-and-outs of football but has a favorite team, and was raised with undying loyalty to them (which implicates, incidentally, that they would show similar loyalty to their boyfriend). Not so. Not all men love football, for one.

But more than that, guys are looking for more than a bro in their romantic partner. They don't want a friend with whom they can play video games. They have plenty of those. They want someone they can talk with, share their heart with, and of course have sex with. This is not to say that some guys won't love that their woman knows a lot of about The Ohio State football or can sub in on poker night. That can be pretty damn sexy. But it's not a deal-breaker if that's simply not your thing. It's not at all expected or considered super cool for a woman to bro-out.

Being a Sex Maniac

It's no secret that men fantasize about sex. On behalf of heterosexual men I admit it; we tend to fantasize about sexual acts that may be off-limits to some people, such as threesomes and anal sex. But for many men there's a Madonna/whore complex. For these guys, in theory they want a woman who would do all sorts of crazy things in bed, but the women they actually choose to date would rarely go for it. If you're not the type to go for it, that's okay. Really. In fact, if you turned to your guy and asked to do something way out of your usual sexual wheelhouse it might freak him out.

Which is not to discourage anyone from experimenting in the bedroom; that is always fun if openly communicated and agreed upon in advance of the actual act. But no guy just assumes his girlfriend would do these things because she's "cool." If anything like that happens it's because you have a stable relationship and can experiment. It's dependent on the type of man, but many of us guys aren't expecting or even interested in being that kinky.

Being Hot and Understanding

This is where the definition gets vague enough that I can unequivocally say yes - men want the women they date to be hot and understanding. But what "hot" means is entirely subjective. Hot does not, as the definition at the beginning of this piece implies, mean you have to be a size 2. We men like women of all shapes and sizes. And one of the hottest things about a woman is that final word in the definition: understanding.

Underneath all of the burping and the poker and the throwing hotdogs down your throat, men care the most about being understood. We want a partner who gets us, who can see that we are good and cherishes us for who we are. While I don't think you need to be a bro or a sex maniac in order to be a "Cool Girl" I do want to make it clear: men think the coolest thing you can do is understand who they are.

Being cool starts with being genuine to who you are as a person. So "understanding" can include understanding and communicating the wide range of emotions you feel. You get jealous? Own it. Work on it. Communicate about it like an adult. That is a good form of understanding, because he is going through similar emotions in a relationship and should equally be cool. Cool here is, in its simplest sense, approaching situations rationally and communicating effectively. Uncool is letting your stress and reactions take over and losing any sense of empathy for your partner.

We men know that there are a plethora of cool girls out there. But in searching for the "Cool Girl" type we are looking for women who are confident in their own skin, understand who they are, and who like us for who we are too. That is the essence of being cool.


Is It Too Much to Ask for Looks and Personality?


4 Attractive Traits That Are More Important Than Beauty

Advertisement - Continue Reading Below
More From Relationship Advice
How to Get Over a Breakup, According to Experts

10 Weirdly Specific Dating Sites for When You've Exhausted Every Other Option
9 Signs of Cheating You Need to Know
Am I a Lesbian?
6 Signs He's About to Say I Love You
The Pros and Cons of Breaking Up in a World Run By Social Media
Why Men Break Up With You Around the Holidays
This Is How You Should Break Up with Him