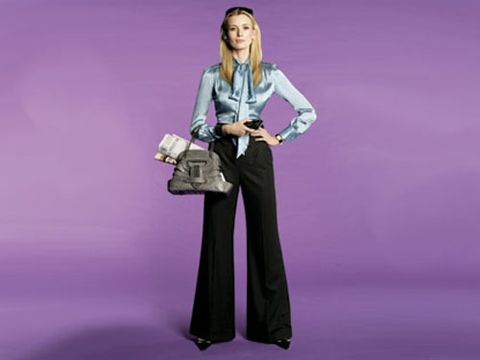 "Why I Love My Alpha Wife"

I wake early to get to my desk. I first grind the coffee beans, fill the espresso maker, ready the milk, empty the dishwasher while I'm waiting for the milk to heat, the coffee to come up. When she wakes I bring her a cup, usually, but not always, in bed.

When they wake I make breakfast for the kids, pack their lunches. I make sure their schoolwork is finished and packed, their backpacks by the door.

My wife takes them to school, on the way to the office, where she is the boss.

She is a publisher. I am a writer. Left alone, I work through the day, once or twice a week throw in two or three loads of laundry, wash and dry the clothes, linens, towels, put them away, except for her clothes, which I leave on her dresser, not wanting to put things in the wrong place. Amidst all the piles, I try to pay extra attention to her jeans and her fine articles of lingerie, which she prefers attending to herself lest I screw them up.

At 3 o'clock I pick up the kids, take them on some days to the Y for swimming lessons, or walk them leisurely and pleasurably home, stopping on the way at the grocery store to pick up milk (always milk) and anything else we might need for dinner.

She comes home at 6:30. I do the cooking. Usually something simple — roasted chicken with potatoes slathered in paprika, salt, and pepper, left to roast in the chicken's juices in the bottom of the pan; spaghetti and meatballs (she passes on the pasta but loves the meatballs: beef, veal, pork, one egg, bread crumbs, fresh parsley, oregano, basil, salt, and ground pepper); or I call ahead for rice and beans ("My wife will be there in 10 minutes") to the Cuban-Chinese restaurant that we love.

We clean up together.

We've got it down.

She describes herself as a control freak. Sure, she likes things done her way. But then again, I like things done my way. We are lucky enough that her way and my way often coincide. Once I asked her to clarify what she means by "control freak."

"Like when you were finishing your book," she said.

There was a slight glitch that took place in our lives last year, and if I'm going to be honest the year before that, and the year before that, and a couple of years more than that besides. I was finishing up a novel I had been finishing up, or had been nearing completion of, ever since we've known each other. Actually, I had been working on this project for the last 17 years. I guess I fell in love with the research and always felt I had to do more.

I had written it and rewritten it (at one point it was 2000 pages), edited it and re-edited it, asked for help, then lashed out when I got it.

Unfortunately, it put an enormous financial burden on our lives. My end of mortgage payments, utility bills, food, clothes, car payments, insurance, birthday presents, Christmas presents, walking-around money, going out to eat, you name it, all going on my credit card(s).

Having a steady paycheck, she was taking care of most of our responsibilities, but still.

"We've got to talk about your finances," she kept saying.

I would go into a huff.

"Joel, we need to sit down and make a budget," she'd say, in retrospect, calmly enough.

"You don't understand," I would shout. "I'm not like you. I don't get a paycheck. There's nothing to budget."

"No, you don't understand," she would insist. "Our money is running out. You are putting yourself, your children, me, us, at risk."

I would storm off, sulk, snap, crackle, pop, refuse to talk another word with her, leave the room when she came in.

She is a remarkable woman. As small as I am, she is large. She would never lash out at me. She would let her anger be known, but she would not pick me apart, not in this way.

And eventually, I was able to come to my senses.

Thanks to her, we own two beautiful homes. I am good with my hands and love to build and fix and repair, but she is always doing budgets and planning. When it comes to finances, everything must be known, in her opinion, and she works assiduously so that she always knows where we are in terms of money.

We sat down, and we made a budget.

Every payment, every expenditure was written down. I told her I was $100,000 in debt with $20,000 cash advances on my cards still available to me.

She did not flinch, she did not condemn. She wrote the figures down and we went on. She said we could refinance the house, take out X amount of cash, pay off a big portion of what I owed. She said this will help you out for the time being, this is the window in which you can operate, but — and it was a big but — come April we are done, financially speaking. We will lose a lot of what we have built together.

For all the pain it took me to get myself to sit down with her, she liberated me. I took her figures as gospel. Rose each day and went to work. Considered exactly how much time I needed on this chapter and that, what it would take for me to get to the final conclusion of the infernal book.

Thanks to her and her savvy, I met the mark, finished and sold the book. We paid off the rest of my debt.

Still, there are certain things.

Recently we visited London for work. One of her authors, Marco Pierre White, a celebrity chef and restaurateur in Britain, requested her presence at a big political fund-raiser. Could she make it?

She spoke into the phone. "I'm here with my husband," she said. "Can he come?"

She was assured that I could. It was a sumptuous, rather startling affair at one of White's most fabulous and done restaurants, Frankie's, across town from our hotel in Soho.

We were seated at the table of honor, my wife shown to her spot of importance, marked by a place card that said, in perfectly elegant calligraphy, Karen Rinaldi.

I, too, was ushered to my spot, and there was my place card: Joel Rinaldi.

Joel Rose's novel, The Blackest Bird, will be published by W.W. Norton in March.

This content is created and maintained by a third party, and imported onto this page to help users provide their email addresses. You may be able to find more information about this and similar content at piano.io
Advertisement - Continue Reading Below
More From Love & Sex
The All-Time Best Vibrators, Reviewed by Experts
Behold: A Sex Playlist That Won't Make You Cringe
Advertisement - Continue Reading Below
The 60 Best Cheap Date Ideas
Second Date Ideas That Aren't Cliché
The Best Dating Apps for People Who Hate Them
20 Ways to Be a Better Kisser