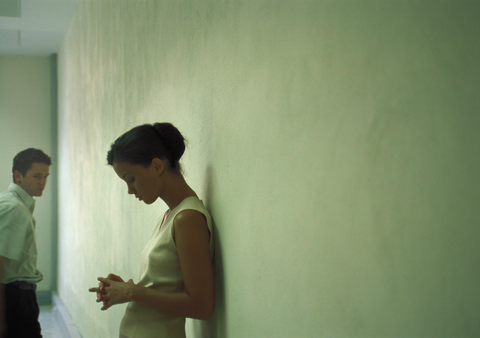 We need to talk," said my boyfriend, Karl.

He had my attention—nothing good ever comes after that statement, and there was also the desperate smile on his face. It was the unmistakable look of a man with whom you're about to be very, very angry.

"Okay, who did you sleep with?" I asked, trying to make a joke.

"No one! But, well, I did get someone pregnant."

"Excuse me?" I asked, not believing I could have heard him right.

He quickly told me his story: A few years ago, without my knowledge, he had donated sperm to his lesbian sister's partner, and now she was three months pregnant with his biological child. We'd been dating for four years. I began to sob hysterically.

"If they'd asked me to donate now, I'd have discussed it with you," he continued, stricken. "But I did it a while ago, when things weren't as serious between us. I didn't know for sure that they would even use my sperm or that it would work. I didn't want to upset you for nothing. I just found out."

I began to scream at him. So what if we hadn't been that serious? He could have given me a heads-up, asked my opinion, let me know at any point over the course of our relationship. I hurled a few insults to top things off, then took a deep breath and tried to calm down. A part of me was already seeing his point of view—sperm donation is a thorny topic to begin with, much less when you're in a new relationship; it brings up all kinds of questions neither partner is ready to answer. And I appreciated his desire to be a loving, supportive brother. But that he hadn't told me about it until now, after all these years? That was devastating. And I couldn't get past the consequence of his decision: A baby was about to come into the world that was his but not ours.

In the immediate aftermath, we talked until we were exhausted, had teary sex, and then he fell asleep. He probably thought things were all patched up while I lay there mentally dividing our belongings, thinking about the plans I'd have to cancel and which friends I'd call in the wake of our breakup. Because we had to break up, right? Although I knew what he'd done wasn't really cheating, it felt exactly like that to me.

When Karl and I met in 2008, our relationship was long-distance, so it didn't seem destined for marriage. We got to know each other in short, ecstatic bursts that I thought couldn't possibly represent a relationship in the real world. Then he moved to New York City, and over the next year, we became crazy about each other. Our relationship was like an ongoing, insightful conversation: sometimes hilarious, sometimes contentious. Pitting myself against Karl's brain always made me feel sharper.

Still, we weren't in a rush to commit. We loved each other, but we also loved our separate apartments and busy careers. As I neared 30, I pondered marriage and kids—and how much longer I could avoid both. The truth is, I was scared. Opening that door to adulthood meant closing many others, and I wasn't ready to narrow my choices. Besides, Karl and I hadn't seriously discussed our future. Until now, I had been content to coast along on the cusp of adulthood.

In the morning, after an awkward and mostly silent breakfast, Karl left and I stewed, conflicted. On the one hand, I felt guilty for letting my jealousy override what must have seemed to him like a selfless act, the equivalent of donating a kidney to a sibling. I believe deeply in the right of gay people to marry and have children; I also understood that Karl's sister and her partner wanted a child who was biologically "theirs," and this was a way for them to have one. How selfish of me to begrudge these women something I had no real claim on. Also, it seemed like an inappropriate thing to claim. After all, we weren't talking about my boyfriend's love—we were talking about his sperm.

At the same time, his decision to donate sperm without telling me would have lasting consequences for our relationship. I imagined two possible futures: reconciling the fact that he would have a biological child whom I would have to see, if only occasionally (his sister lives in Germany); the other, life without Karl. Could I really give him up? No, but I also couldn't pretend this never happened.

Doing the dishes that afternoon, elbow-deep in suds, it hit me: I was upset because I wanted to be the one having Karl's baby. Deep down, I really couldn't imagine a future where he and I didn't eventually form a family. I'd never told him this, much less admitted it to myself. His donation had forced the knowledge upon me. But now that I knew, what would I do about it?

Later on that day, Karl sent me a text: In just a few days, his sister was flying in to New York from Germany with her two older kids, and she needed us to watch her daughter Zoë for 24 hours.

Zoë is a funny 9-year-old who idolizes me. Normally I'd have jumped at the chance to spend time with her, but under the circumstances, it seemed like a punishment. I considered leaving Karl with solo custody, but then imagined him handing Zoë a philosophy book to amuse herself and caved; maybe it would be a good distraction from our problems. As we discussed Zoë, we started to joke again — Karl suggested we act like the comically hypervigilant parents so common in our Brooklyn neighborhood. "We could scandalize everyone by letting her walk 10 feet away from us without a leash!" I said with a laugh.

When Zoë arrived, we knocked ourselves out trying to amuse her, picnicking in the park and leading her through endless subway mazes to hit all the tourist spots. In the evening, we came back to my place, where we were all spending the night, and collapsed with fatigue. The high-stakes emotions coupled with physical exhaustion had taken its toll, yet it was exhilarating, too. Walking down the street with Zoë had filled me with a sense of pride. I wondered if people assumed she was our daughter. In a weird way, it made me feel closer to Karl.

"We're taking a nap," I told Zoë, cueing up a show for her on Netflix. By the time Karl and I got up and started fixing dinner, she was asleep on the couch in her clothes. "Should we wake her up to eat or have her change into pj's and just put her to bed?" I asked. "Oh, man, I left the pajamas at my place," said Karl. "We could put her in a T-shirt or something."

"Should we wake her? She's probably jet-lagged."

Indeed, Zoë was snoring, her eyelids fluttering. Karl tried to nudge her and she shook him off resolutely.

"My God, we're terrible at this," he said, as the revelation hit us simultaneously that what Zoë had needed after a long flight was some R&R, not a whirlwind tour of New York.

But we were smiling, bonded by our experimental parenting failure. As we sat down to eat, Zoë still asleep on the couch, I mustered the courage to talk to Karl about what was truly bugging me.

"Clearly, we aren't ready to be parents, even for a day," I began. "But spending time with Zoë also reminded me that I can't imagine not having kids with you. If you want that, too, we have to actually start talking about the future."

"I think the problem is that we both feel the same way—we want it, we're not ready, and we're scared," he said, hesitantly. "At least, that's how I feel."

I nodded, heartbeat racing. "Me too."

"So let's make it less scary. Instead of getting married and pregnant tomorrow, let's move in together. If that goes well, we'll do the next thing, and the next thing."

"That sounds noncommittal," I said. "I worry that because you'll already have a biological kid, you'll feel like the pressure is off. Also, that it won't be special for you if we have a baby."

"When we have a kid, it will be different."

I knew he believed it as he said it, but I was still skeptical. However, we moved in together two months later, right around the time Karl's nephew was born. I haven't met him yet, but my feelings about that baby change daily. During moments when I feel sad, I remind myself that Karl's motives came from a good place.

We learned a lot from Karl's donation. I now understand that it's better to deal with the big issues rather than waiting for them to smack you upside the head. Karl learned that putting off a difficult conversation—or avoiding it entirely—is idiotic. And we both learned that sometimes you don't know what you really want until you are forced to think about life without it.