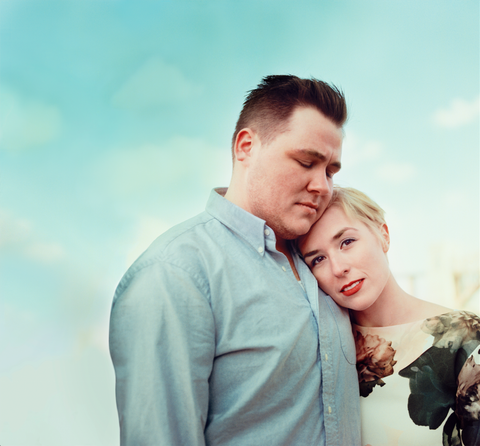 Having learned almost everything I know about dating from watching teen dramas like The O.C. and Gossip Girl, I expected to do some crazy things for love: get wrapped up in a lover's drug-smuggling ring, perhaps, or steal a rival's yacht. But helping my boyfriend in his transition from female to male was not an act of devotion I could ever have anticipated.

I first met Liam in a coffee shop in my Bronx neighborhood three years ago. When he started a casual conversation in line, I was struck by his country-boy charm and cute gap-toothed grin. "What's your name?" I asked. His slow, swaying voice sped up: "Liam, but that's a recent thing because I'm transitioning—I'm transgender. I was born a girl, but I've always known I was a guy. Is that OK?" From looking at him, I never would have known about his recent past. "Of course," I said, posturing behind my liberalism and years of gender studies classes. But I wasn't actually so confident. While I'd met other transgender people, Liam was the first to come out to me directly. I felt like I was handed a live grenade—weren't confessions like that supposed to be explosive?

"How's that going?" I asked. His warm eyes lit up. Apparently, I was trustworthy. He told me the basics: He had never felt like a woman and had never tried to look feminine. In high school, he bulked up his 6'1" frame with weight lifting and diet supplements. He played rough sports, worked construction, and trained his voice to sound deeper. Now that he was an adult, he could finally live as a man. For him, that meant using a new name and wearing a binder—a tight, meshy undershirt—to tamp down his chest. "That's impressive. I can barely commit to a new haircut," I joked. In truth, I was in awe of the idea of totally reinventing yourself. I felt myself drawn to Liam's frankness, so when he asked me to lunch, I said yes. Maybe we'd become friends.

That next Monday, we met at a café near my apartment. For two hours, we talked about politics and bad TV, how I missed my hometown of Chicago, and his dream to work as a legal advocate for other transgender people, who face rampant discrimination. I didn't realize that Liam thought of our conversation as a date until he walked me home. Outside my apartment, he caught my eyes dead-on, hoping for a kiss. I tried to give him a formal handshake, but he wrapped me up in a hug that stopped my train of thought. His touch felt electric. "Catch ya next time," he said, grinning as he walked away.

What would I call that: a whateversexual?

Caught off guard, I sped up the stairs. I hadn't expected him to come on to me, or that I would like it. I was straight—that wasn't up for debate. I had never dated a woman before, let alone a transgender man. And I didn't know how to brush Liam off without making it about his genitals: "Sorry, if you were born a guy, I'd be totally interested, but …?" His identity was more than a personal quirk I could use to differentiate him from other men I'd dated ("Rock Critic Guy," "Might Have a Girlfriend Guy"); being transgender wasn't a funny thing to talk about with my girlfriends over brunch. Still, I kept thinking about us in bed, and saying, "Whatever you want to do, I'll try it." What would I call that: a whateversexual?

By the end of the week, temptation got the better of me, and I invited him over. On an unseasonably warm January night, we sat next to each other on my fire escape, where I felt comfortable telling him things I hadn't even told close friends, like about my struggle to get sober the year prior. He told me about growing up in his strict family, how tough it was to come out to them, and how they'd rejected him afterward. He said he wanted to start hormone therapy—weekly shots of testosterone—as soon as possible and get reconstructive surgery on his chest.

As we talked, his identity stopped seeming like an obstacle. Instead, it felt like just another aspect of him, like the gold speckle in his left eye or the anchor tattooed on his left shoulder. Somewhere during a lull in conversation, he leaned in and kissed me. My stomach dropped as he pulled away. I didn't want him to stop. And at that moment, any fears about his gender vanished.

Before I could think it through, I was dating a trans guy. It might seem like I'd be lost in confusion, wondering what my new relationship meant for my sexual identity—but I wasn't. I was too love-struck to intellectualize it. I couldn't fathom us not spending our lives together; I didn't worry who I'd be attracted to if it didn't work out.

At first, I didn't want to tell anyone. The fact that I had fallen head over heels for Liam out of nowhere was big enough to handle; would his trans identity be met with invasive questions? After my then-roommate confronted me about spending time with "some dude," she was more surprised to see me dipping outside of my normal dating pool (indie rappers and guys who brewed IPA in their bathtubs) than to find out about his transgender status, but she was totally supportive. My family was, too—after initially being confused about what exactly "transgender" means.

When the early relationship fog cleared and I finally did start to think about what it all meant, I realized that I wasn't attracted to the "human male" as defined by an anatomy textbook. I was attracted to masculinity, to manliness, which Liam had in spades. I liked being wrapped up under his broad shoulders and having him pull out my seat for me at a restaurant. I wound up with the world's best deal, I joked: a boyfriend who could lift heavy objects and empathize about my period.

Dating a guy in transition means committing to a moving target, though. Once he started testosterone therapy, his body and personality changed at sometimes alarming rates: His familiar face thinned down and began to sprout hairs; his sex drive exploded; his voice got deeper; new muscles surfaced every day. At first I worried that he'd evolve right past me. But after plenty of long, 3 a.m. talks about my fears, I realized that no matter what happens during this transition, our love is unwavering. So when he proposed to me last fall, I said yes, prepared to embrace the unknown. Isn't that what marriage means for anyone: committing to an uncertain future, together? Ours may be a little murkier than that of other couples, but I'm ready to be surprised by what's to come.