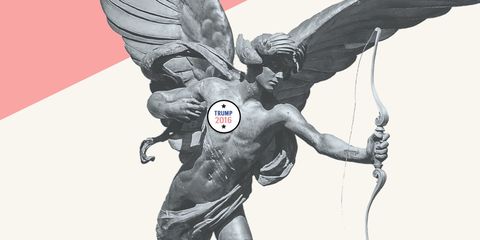 How did it feel? Not when you fell from heaven, but on November 8, when America elected Donald Trump and hell rushed up to meet you. Was it difficult to eat? Or did you plunge your hand into a box of Vanilla Almond Special K and not stop until the crushed-nut bits got caught under your fingernails? Did you cry when your mom texted you "This is the story of your life," knowing that you've also always tried so hard, only to perpetually come in second place because of your personality and gender? Did you sob again when Hillary Clinton apologized like she'd let us down?

But in those funereal days after, did you once think about your love life?

Some people did, or at least the physical bit. (See: those Craigslist listings seeking post-results sexual healing.) But more often than that, there was discord and violence. Divorce. Men punching women. Wives running husbands over in their Ford Escapes, even though that has been disproven as yet another bogus news story. (But it's still like "Yeah, could see that," isn't it?) A Facebook friend who posted her text exchange with a Bumble bro, in which he chided her for "being a little ridiculous" after she challenged him on voting for the "less poisonous" of the two candidates. (He was still down to get a conciliatory drink, though.)

That's just the anecdotal evidence, but soon, the data will roll out, and we'll have the numbers to back this up. Breakups increased by however-many percent. Swipes plummeted. Matches...continued to never speak to one another.

Love in the time of Trump feels a bit frivolous when there are more pressing matters at hand, such as our professional, reproductive futures and the safety of our loved ones under a Jacksonian Kitchen Cabinet of angry white men. I, for one, have been simply too preoccupied with sorting through the wreckage to bother, especially when fragile masculinity is partly what got us here in the first place.

Before, you could be moderately confident the dude sitting across from you wasn't a pathological liar, but now, you can't be quite as certain that he's not something worse: part of the silent majority that apparently thinks so little of women that they'd prefer to put an angry Cheeto (flavor: vitriol-blasted) in leadership over a rational career politician.

"I've been too preoccupied to bother, especially when fragile masculinity is what got us here in the first place."

So in the theme of the past couple of weeks, what now? A few suggestions from an individual who only just recently acquired a full emotional range only to lose it again but can somehow still muster the following: Just because we might be entering an era of jingoism and intolerance doesn't mean there's a complete absence of compassion in the world. In fact, there is now the kind of outpouring that comes flowing in after a natural disaster. (Think of how many friends texted to say "I love you" that Wednesday morning.) Float on your back in it. Direct your pain elsewhere. Love trumps hate, and hate can be overcome. And no matter how finely ground it may be, don't close your heart—there's more use for it now than ever.