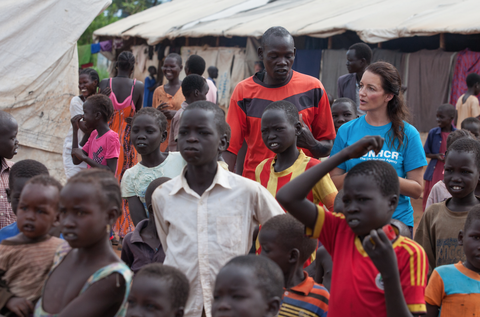 Emerging out of the dust clouds that gather closer and closer is a small minibus. It stops beside us, and an ancient-looking man unfolds himself from the vehicle, looking dazed. It is swelteringly hot and he's drenched in sweat. His daughter and her tiny baby are with him, and they, too, look lost and weary. In their confused state, they seek out the shade of a building while I run to get them water. But I can't stay with them...

An old woman who appears to be blind needs help out of the van along with her single, small bag. She is followed by a young couple with a baby who has terrible sores on his legs—the mother is rightly worried and anxious. The baby needs a doctor and a call is made, but there are plenty more in the van who need attention.

I am in Adjumani Refugee Camp in Northern Uganda with UNHCR, The UN Refugee Agency. Adjumani is one of four refugee camps in this area. Until I read my briefing notes for this trip, I hadn't realized that the ongoing conflict just across the border in South Sudan was still driving so many families to flee their homes and seek refuge and safety in neighboring countries. And I'm not talking about just a few families. Staggeringly, over 551,636 refugees have fled South Sudan in total since the start of the conflict in December 2013. Over 155,417 of those refugees have arrived in Uganda alone.

This is one of the large trucks that regularly arrives with new refugees fleeing across the border from South Sudan. I held the little babies while their mothers climbed down to us—everyone was covered in dust!
Jordi Matas/UNHCR

And here, enveloped in an even larger, swirling dust cloud, rumbles in a huge UNHCR truck that has arrived from the border carrying vulnerable, worn, and traumatized human cargo. This one carries 55 more frightened souls escaping the violence in their country. The door slides open and, through the gap, people start jumping to the ground. The majority are women and children – as are 85% of refugees from this conflict – with at least 35,000 children traveling alone, either having been separated from their family or because their family has been killed. Some will never be able to find out the truth of what happened to their loved ones.

It is an overwhelming sight to see this outpouring of human beings, many of whom are being made refugees for the third or even fourth time in their lives. I wonder aloud what I should do and the UNHCR staff says to, "Welcome them!" I move forward and start lifting children out of the truck, supporting mothers as they climb to the ground. Everyone is covered in dust, bone thin, and dazed. Hardly anyone has any bags or belongings. They have fled wearing only their clothes and they have avoided the gunfire on the roads by hiding in the bushes, surviving on berries and leaves for days as they journeyed to the border.

"Everyone is covered in dust, bone thin, and dazed. Hardly anyone has any bags or belongings."

I tell them: "You are welcome here.  You are safe now.  We are here to help you." They are simple words but the reality of their meaning is profound and I feel a responsibility and privilege in saying them.

I think we have helped the final few out into the blazing sunshine when I hear cries coming from the deepest corner of the truck. Three tiny babies are still cloaked in the darkness with their mothers. I hold each precious baby as each mother gathers the few belongings they have and clambers down to me with the support of others.

I got to help hand out the hot meal prepared for all the refugees in the camp. It was really hot! I almost burned myself and the women I was trying to give food to. They were so sweet with my mistakes!
Jordi Matas/UNHCR

We show our tired, subdued new arrivals to a shaded area where they can rest as the registration process gets under way. Camp staff brings large water jugs for everyone. And they begin to cook a meal that soon the entire camp will share. Word travels quickly around the camp that the trucks have brought new arrivals, and anxious relatives gather to see if family members and friends are amongst the group.

Day to day life continues in the Adjumani camp, laundry dries outside of the UNHCR tents that are now home to these resilient and brave people.
Jordi Matas/UNHCR

I'm worried about one teenage boy who speaks English. He doesn't smile and won't sit down in the shade, preferring instead to pace, clutching the straps of his small backpack.  But suddenly, his face lights up as a woman emerges from one of the camp tents. She is his auntie, and I am witnessing the joy and sorrow of a family reunion unfolding before me in a camp so far from the place they call home.

"She is his auntie, and I am witnessing the joy and sorrow of a family reunion unfolding before me in a camp so far from the place they call home."

John, who I meet later on, no longer wishes to go home to South Sudan. Since the age of five, he has been forced to flee his country three different times. In 1988, his family fled to Dima camp, run by UNHCR, in Ethiopia, before returning to Sudan in 1991. They became war-made refugees again in 1994 and for 12 years they lived in Kakuma Camp in Kenya, where John attended both primary and secondary school. When the peace treaty was signed in 2006, he and his parents returned to Sudan, but in 2013 conflict savagely interrupted their lives once more. Both of John's parents were killed. This time John escaped to Adjumani in Uganda.

Sitting in on a class at St. Luke's Primary School near the camp, taught by John, a refugee himself.
Jordi Matas/UNHCR

John is amazingly philosophical about his experiences. He is not bitter. He is not angry. But he strongly believes that education is the answer to the problems of his native country. He is currently head teacher of St. Luke's Primary School, near Adjumani and, while he himself doesn't want to go "home," he feels passionately about educating the next generation of South Sudanese, so that when peace is achieved, and they return to their country, they can avoid repeating the violent patterns of the past.

John, like many others across the country, benefits from a generous (in spirit, attitude and support) Ugandan government policy towards refugees.  Every refugee is registered in Uganda and is free to move around the country, as well as work, and they are even given a small plot of land to live on and farm. Ugandans work and play alongside the South Sudanese in peace and cooperation. The Chairman of the South Sudanese Community Group, Maryok Wilson, tells us: "I carried my wife and my children to get here and now we live amongst the Ugandan people like brothers."

One of the beautiful things about visiting a refugee camp is seeing the joy that the people are still able to find in even the most difficult and dire of circumstances.
Jordi Matas/UNHCR

At a time when there is so much misunderstanding, ill-will, and prejudice towards refugees in so many parts of the world, it's reassuring to hear comments such as this and to see a government, and host community, being so welcoming. But Uganda is not a rich country and it is unfair for us to imagine or expect that it can cope with such large influxes of refugees without the support of the international community. Not just our governments but we, as individuals, too. The current funding gap for the South Sudan refugee crisis is 90%. The needs of these people who have lost everything are huge and urgent. Acute, severe childhood malnutrition is rising as the conflict stretches on, and people need the absolute basics in order to simply survive: tents, soap, pots and pans, blankets, food, water.

Every day the refugees in the Adjumani camp line up to collect clean water.
Jordi Matas/UNHCR

I marvel at John who has miraculously survived a lifetime of war with his humanity intact; I bow to the mothers who have shown such determination and strength in carrying their children on their backs and in their arms for days to get them to safety; and I wonder what the future holds for those newborn babies who have yet to understand anything of the world they have been born into.

"I bow to the mothers who have shown such determination and strength in carrying their children on their backs and in their arms for days to get them to safety; and I wonder what the future holds for those newborn babies who have yet to understand anything of the world they have been born into."

The people I have met are ordinary people who have shown extraordinary resilience. And it is the same with refugees all over the world. Despite losing so much, and having their lives reset to zero, they still want to achieve —for their families, community, and their country. It seems to me that, the very least, each one of us can give refugees, both across the world  and in our own schools, communities, countries, honoring these words:"You are welcome here.  You are safe now.  We are here to help you."

For more on Kristin's visit with UNHCR, please go to: unrefugees.org/Kristin

A woman is sweeping the dirt outside of her current home, which happens to be a tent. It speaks volumes about the pride taken in making a home for their children wherever they find themselves.
Jordi Matas/UNHCR
This content is created and maintained by a third party, and imported onto this page to help users provide their email addresses. You may be able to find more information about this and similar content at piano.io
Advertisement - Continue Reading Below
More From Travel
Add St. Lucia to Your Post-COVID Bucket List
What to Buy From Away's Second-Ever Sale
Advertisement - Continue Reading Below
Explore the Luxe Private Island of Cayo Espanto
Andros Is the Most Underrated Spot in the Bahamas
The Most Covetable Weekender Bags Out There
Intl. Resorts That Offer On-Site COVID-19 Testing
Magical Ski Destinations for a Safe Winter Getaway
No Clue Where to Go in Turks & Caicos? Start Here
I'm Afraid to Travel by Myself in My Own Country
Over Cabo? Head to Punta de Mita, Mexico, Instead