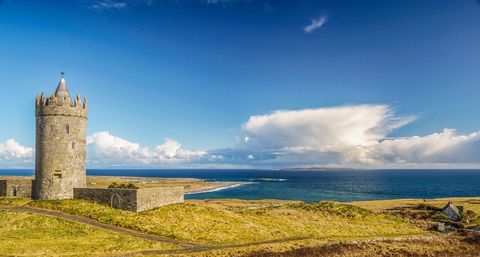 Whether you're more of a Lannister or a Stark, Black Tomato has answered the prayers of all 8.9 million of you loyal Game of Thrones fans. Cramming all six seasons into nine nights is suddenly a lot easier than it sounds (probably because the tours are lead by an official Game of Thrones location scout).

That's right—this tour allows you to have complete charge in your Westeros destiny. Start by answering Black Tomato's few simple questions, such as where you want to go, how long, how many people, and price range (this one ranges from about $8,000-$10,000), and your tailor made trip to experience Game of Thrones like never before is already at your fingertips. Whether you want to start in Dubrovnki, Croatia, travel to Belfast, Ireland and end in Reykjavik, Iceland or vice versa to deciding whether to stay 8 or 14 nights, trust us, this itinerary was made for a Khaleesi.

What better way to start out this journey than spending your first four nights at the Villa Dubrovnik overlooking the capital of the Seven Kingdoms? That's right—it's the site of King's Landing.

Pass through the Pile Gate and channel King Robert Baratheon as he fought for power or become a member of the Targaryen family as they were exiled from their land. For a last stop on your tour of King's Landing you'll stop to take in the magnificent views of "Blackwater Bay," the site of the bloody battle when Stannis Baratheon tried to take the Iron Throne from King Joffrey.

Pass through where the Targaryen family were exiled (and enjoy the insane views, of course)

Set sail around the Elafiti Islands and bring out your inner Khaleesi and Ser Jorah and soak up the sun and deep blue waters.

The House of the Undying

Here, you'll be given a private tour of the Benedictine Monastery AKA the House of the Undying.

From here, you'll set sail onto the seaside village of Trsteno, the home of Trsteno Arboretum, used as the backdrop of the gardens of King's Landing palace and as Red Keep, home of the Seven Kingdoms. Having fun yet?

North of the Wall

After a few nights of living luxe in the islands, it's time the experience what the term "Winter is Coming" really means. Black Tomato flies you from Croatia to Iceland to take you to the land North of the Wall.

For the next days of your trip you will explore the south coast of Iceland (exactly how the show scouters did) and see the Vatnajökull glacier, the largest icecap in the world outside the arctic regions, and where Jon Snow ruled Castle Black.

Fun Fact: Most of the "North of the Wall" shots were filmed here.

In Iceland, you'll be able to relive most of Seasons Four and Five. Discover the the Pjorsardalur Valley and the incredible Golden Circle where most of Season Four was filmed, then head over for a private tor of Lake Myvatn and Myvatn Nature baths, two areas where Season Five was filmed.

Wondering where you'll be staying during your quest? Sleeping outside the Wall? Black Tomato has you completely covered. Nights will be spent at luxurious hotels across Iceland—Hotel Ranga, Fosshotel Vatnajokull, Kvosin, Vogafjos—so you can literally live, breathe, and become the next cast member.

And on to Winterfell

That's right, all of you Winterfell fans get ready, because this portion of the trip you will be making a stop at Stark ancestral home.

From riding in the same boat that the film crew used during production and seeing where Davos Seaworth was shipwrecked after the Battle of Backwater Bay, to Ballycastle to see where Varys was born a slave in the Free cities—Northern Ireland will become your own backdrop.

If you hate King Joffrey (as most of us do) or don't feel like trekking a glacier, Black Tomato has made itineraries so you can create your own Game of Thrones journey—it can be as intense as arranging your own archery lesson outside of Winterfell or just relaxing and taking in the incredible views of King's Landing. Pack your bags and maybe you'll be the one on the Iron Throne...

This content is created and maintained by a third party, and imported onto this page to help users provide their email addresses. You may be able to find more information about this and similar content at piano.io
Advertisement - Continue Reading Below
More From Travel Guides
Add St. Lucia to Your Post-COVID Bucket List
Explore the Luxe Private Island of Cayo Espanto
Advertisement - Continue Reading Below
Andros Is the Most Underrated Spot in the Bahamas
No Clue Where to Go in Turks & Caicos? Start Here
Over Cabo? Head to Punta de Mita, Mexico, Instead
The Instagram Guide to Lake Tahoe
Head to These Destinations for a Late Fall Getaway
The Insta-Worthy Places to Visit in October
Where to Stay, Eat & Explore in Sag Harbor
The Instagram Guide to Coronado, California