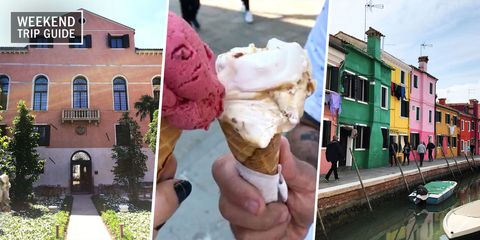 Not to be dramatic, but there is no way you *won't* return from a weekend in Venice a changed person who wants to quit their job, move to Italy, and subsist on a diet of cicchetti (Venetian bar snacks) while getting lost in the city's maze of canals. While Venice can be pretty crowded during tourist season (which, let's be honest, is every season), finding the sleepiest and most authentically Italian spots is well within your grasp. You just have to head off the beaten gondola. Here, where to eat, sleep, and hang in Europe's most breathtaking city.

Speaking of breathtaking, let's talk about Palazzo Venart, the 5-star hotel just steps from Venice's grand canal which will be your home-away-from-home for the weekend. Actually, make that palace away from home—because the hotel is literally a revamped palazzo, once housing some of Venice's most important families. The hotel's price tag is well worth the splurge, with rooms so sumptuous you literally feel like royalty, and a complimentary breakfast that's basically a religious experience if your religion is cheese and meat. Pro tip: it's not on the menu, but if you ask for mozzarella in the morning, you'll be presented with a giant ball of fresh cheese so delectable it's literally impossible to describe, so I won't even try.

The circa 1400s hotel—which is decorated with frescoes from the 1800s and just happens to be millennial pink—comes equipped with views of the grand canal, so you can lazily relax in a robe while watching the vaporetto go by. And if you really want to experience something sublime, there's a private garden that leads right to the water. Yep, it's just you, the view, and (ideally) a glass of wine.

Pro tip: you don't want to waste your weekend in Venice indoors and waiting in lines with tourists. What you want to do is walk. Venice is resplendent with landmarks—you pretty much can't go three feet without coming across a stunning private mansion, basilica, or church. Walking is how you get a true feel for the city—and good news: Palazzo Venart is in the most charming neighborhood ever; not too populated by tourists, where you can actually snap a photo of yourself on a canal without a million other people doing the same thing. That said, there is some merit for hitting the landmarks: the Rialto bridge offers one of the best views of the city (go super early in the morning so you don't have to wait your turn to take a picture), and you'd be crazy not to at least swing by Basilica di San Marco.

Speaking of landmarks, let's talk about Murano and Burano—two of Venice's adjacent islands that are world-famous for making glass and lace (respectively). Some people might tell you to skip the islands if you're only in Venice for the weekend, but I am *not* one of those people. My advice: get up early (honestly, that's my constant tip for travel) and get the crack-of-dawn boat to Burano. It's a short and stunning trip, you'll find the island at it's most quiet and colorful. Grab an espresso, take a walk, buy some lace, and you'll be back in the city proper by lunchtime.

The Art Night is back! Tomorrow June 17, 6-10 pm the #peggyguggenheimcollection joins Art Night Venezia, promoted by the @cafoscariuniversity and the Comune di Venezia. From 6 pm to 10 pm free entrance to the museum and the temporary exhibitions, with guided tours in English and Italian and the workshop for children “White Night” (held in Italian only). Join us! Learn more on our website www.guggenheim-venice.it 📷 David Heald

For the most part, Venice is one of those cities where anywhere you walk into will serve you a delicious meal. But you do want to beware of tourist traps, so stay away from cafes near San Marco, and as a general rule of thumb avoid restaurants where the menu is in English. This means they're catering to tourists, and you're living this trip like a local.

Speaking of locals, you definitely want to try Venice's famous cicchetti: snack on francobolli at Do Mori (built in the 1400s, FYI), or head to All'Arco for an array of delightful bites on baguettes. If you want to stay a little closer to Palazzo Venart, check out La Zucca for a tasty plate of asparagus flan, and if you're grabbing food to go please do yourself a favor and head to Dal Moro. This will be there to greet you:

1. Skip the expensive gondola and take a cheap vaporetto. They're basically the coolest mode of public transportation there is, and you pay super low fares for a ride up the grand canal, instead of—ya know—a small fortune for a pretty tired tourist trap.

2. Memorize some Italian. While locals are typically more than friendly when you start talking to them in your native language, a few phrases go a long way—and can be quite helpful for you. Especially "Più polpette, per favore," which means "more meatballs, please."

3. If you're taking public transportation (read: a boat) back to the airport, get there way, way, WAY earlier than you think you need to. Vaporettos are first come, first serve—and you might miss several before fitting yourself and all your souvenirs onto one.

Mehera Bonner Contributor Mehera Bonner is a news writer who focuses on celebrities and royals—follow her on Instagram.
Advertisement - Continue Reading Below
More From Travel Guides
An Instagram Travel Guide to Basque Country
The Ultimate Catskills Winter Getaway
Advertisement - Continue Reading Below
The Instagram Guide to Dublin
The Instagram Guide to Tokyo
Travel the World Without Begging for More PTO
How to Elevate Your Airport Style
Everything Worth Doing During a Weekend in Denver
Embrace Your Inner Witch in Salem, Massachusetts
The Best Places to Explore In Dreamy Dubrovnik
Channel Fall Vibes in the Catskills