October is here, which means it’s officially the month of festive gourds, ~*spooky*~ ghosts, and cultural appropriation in the name of “harmless fun.” And kicking off the season’s scariest ignorance is makeup artist Percem Akin, who Instagrammed a picture of her Halloween makeup in—let’s call it what it is—blackface, with the caption, “Color and Pain. My Lovely Black Beauty Transformation Make up [sic].” Oh, and did I mention that Percem Akin is white?

The photo and accompanying YouTube tutorial have since been deleted and replaced with an apology, but according to the Daily Mail, Akin also tagged her photo—in which she paired a traditional African headscarf with a bloody gash down her cheek—with the hashtag “slave.” Because #Halloween, right?

Listen, as a Caucasian person with a muddled ancestry and a middle-class upbringing, I have virtually no culture that can be appropriated. Which is probably why so many of my Caucasian (and non-Caucasian, but let’s deal with one subsect at a time) brethren are ignorant assholes when it comes to Halloween and cultural appropriation, because they can’t possibly perceive what it feels like to be marginalized.

Related Story
The Best Celebrity Halloween Costumes of All Time

I’m also fully aware that out of all the people who could and should be writing about cultural appropriation, I, as a white person, am not at the top of the list. (And if you don’t want to hear it from me, I get it, but then promise me you’ll read Maisha Johnson’s insanely enlightening viral article on why, exactly, cultural appropriation is harmful, instead).

But, as a beauty editor with a deep love and appreciation of makeup, Halloween, and human beings, I’m here anyways, speaking from my innate platform of white privilege, to tell other white-privilege cardholders to cut the shit this Halloween and please, for the love of all things moral, not appropriate someone else’s culture.

“You’re too PC!” I hear many of you shouting. “You can’t take a joke!” But listen, when you dress up as a culture that’s either currently being oppressed or has been oppressed in the past, you’re being offensive. That’s just how it works. Nope, stop, don’t argue with me—that’s simply how it works. It doesn’t matter if you “just” think that African women are beautiful, or that Día de los Muertos skull makeup is super pretty, or that Pocahontas was your favorite Disney character, or that a “sexy Gypsy” costume really flatters your hard-earned abs, because unless you explicitly belong to that marginalized culture—in which cause, you probably wouldn’t be wearing most of these costumes to begin with—then you, as a member of an inherently privileged and historically oppressive group, are in the wrong. Like, the way, way, way wrong.

Because unlike, say, makeup artist Percem Akin, who gets to scrub off her “black face” at the end of the video and exist as a white-presenting female in a white-favoring world, the marginalized groups she appropriated don’t get to wash off their systematic and historical oppression at the end of the day.

2. Don’t wear anything you can’t readily explain the history of. No, I’m not saying you need to research the history of fairies and pirates or old Shoeless Joe Jackson before you dress up as them, but if your costume at all, even a tiny bit, stems from someone else’s heritage or culture, then you better learn the history behind it, make sure it’s totally appropriate, and also be prepared to explain your reasoning if anyone questions you on it.

3. Don’t paint your skin to match someone else’s skin. Ever. This one really shouldn’t require explanation. 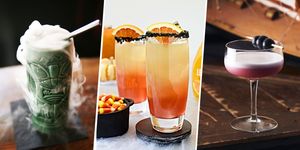 And sure, you technically have the “right” to dress up as a sombrero-wearing, tequila-swilling, Hispanic stereotype, but you also have the choice to not be an asshole that enforces harmful tropes that literally oppress huge communities of people. And if I were you, I’d choose to be the latter. Because everyone likes the non-asshole better, anyway.

Chloe Metzger Deputy Beauty Director Chloe Metzger is the deputy beauty director at Cosmopolitan, obsessively writing about new makeup launches, the best hair products (curly girl here; whattup), and the skincare formulas that really work for every skin type (follow her on Instagram to see behind-the-scenes pics of that magazine life).
This content is created and maintained by a third party, and imported onto this page to help users provide their email addresses. You may be able to find more information about this and similar content at piano.io
Advertisement - Continue Reading Below
More From Halloween Ideas We Love for 2020
Our Favorite Celebrity Halloween Costumes In 2020
A Classic Horror Bucket List for Scary Movie Buffs
Advertisement - Continue Reading Below
Scary-Glam Halloween Makeup Ideas to Bookmark
Group Halloween Costume Ideas for the Office
Halloween Costumes You Can Wear for Work Zooms
Celebs Who Dressed as Other Celebs for Halloween
The Best Duos to Channel This Halloween
Look Back on Heidi Klum's Epic Halloween Costumes
The Best Celebrity Couple Halloween Costumes
The Popular Horror Movie the Year You Were Born