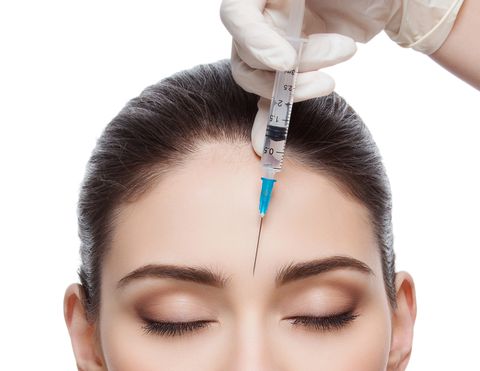 I pride myself on being low maintenance. I have three pairs of pants I wear in rotation, and two are the exact same Levi’s. I’ll put on eyeliner and mascara for a first date, but I wouldn’t even know how to apply anything more. And I have a long mane of blonde hair that has never been dyed in a salon—a few spritzes of Sun-In keeps it light.

But I do have one high maintenance habit: Botox. For the last decade, every four months I’ve gotten injections to freeze the small muscles of my forehead.

The first time I did it was sort of an accident. I was twenty-five and had no wrinkles whatsoever. But when I accompanied my 40-year-old friend to her appointment, she encouraged me to do what she called “the best thing [she] had ever done.”

Her doctor glanced at my pristine skin and agreed. “The earlier you start the better,” she said, her cool fingers resting on my forehead, “That way you can be young forever.”

Young forever. It was the promise of fables and science fiction, and certainly an impossibility in the real world—but put that way, it got me.

“Do it,” I immediately replied.

“The earlier you start the better. That way you can be young forever.”

The whole procedure lasted five minutes—a length this non-salon-goer could can handle. The doctor asked me to raise my eyebrows, scowl, then relax. Poke. Poke. Done.

When I got home and looked in the mirror, nothing was different. I don’t have sensitive skin, so there weren’t even little red marks where the needles had pricked. But over the next two weeks, my forehead slowly froze until I was unable to furrow my brow at all.

Some of the benefits were obvious: My pensive scowl (also known as my resting bitch face) was gone, as were the strangers in the street telling me to smile. And my headaches had lessened.

But it was neither of those results that convinced me I would most certainly be returning to my friend’s doctor in search of more magic potion. It was something else, it was this ineffable feeling that came over me when I caught a glimpse of my frozen forehead. My existential angst was soothed by the knowledge that my face would look the same the next day, then the next, and then the one after that.

I had stopped my forehead from its fate—to become lined. I had managed, in a way, to stop time. Who wouldn’t want that superpower?

And at that point in my life, I wanted to pause the clock more than ever. I was in my mid-twenties and nothing was going as planned. After college, my peers all seemed to slip easily into meaningful careers and relationships, but three years out I was still just slipping around. After a stint on Wall Street and another in a criminal defense law firm (fielding questions from murderers and sex offenders who treated me more kindly than my attorney bosses), I knew what I didn’t want to do. But these experiences had brought me no closer to figuring out what I did. Which might have been okay except that my personal life was also a mess. I was partying like I was still in college, and dating, to me, meant a sloppy drunken hook-up after last call.

I was lost. If I could freeze everything maybe I would stop worrying about time ticking down. About wasting my one precious life.

I had managed, in a way, to stop time. Who wouldn’t want that superpower?

I wish I weren’t so neurotic, so focused on time passing, but ever since the day 7-year-old me found a tarot deck and turned over the first card to see a skeleton and the word “death,” I have been terrified of my own mortality and obsessed with the shortness of life. In high school, I read existentialist tomes as if they were self-help books. Camus, Sartre, Kierkegaard. Sometimes it helped, and sometimes the implications of meaninglessness only increased my anxiety. By my twenties, I was measuring birthdays not by how many years I had lived, but by how many I believed were left until I died: Twenty-five, okay that means, if lucky, seventy years until death…two more lifetimes until seventy-five…one more lifetime until fifty…fifteen until fertility really drops off. This very-un-fun exercise typically left me gasping for air.

But in Botox, here was a solution—or a veneer of one—to a problem that had none: my finite existence.

And so I kept returning to the plastic surgeon. Again and again. For ten years. I always told her to be conservative. I didn’t want my face to be completely immoveable. It wasn’t about looking different, or better; I just wanted to keep the reflection in the mirror the same—because then I could believe that time wasn’t passing.

I developed an appreciation for plastic surgery. I had previously thought of it as an excess or a vanity, but now I realized the motivations behind showing up at the doctor’s can be much more complicated. There is a relief in pretending that I can stop my body from aging, from disintegrating, from being mortal. I feel control over something I have no control of.

I am thirty-six now. The trying on of careers continues (I can now add psychologist and journalist to the list), but the partying has stopped, and I have a loving boyfriend who makes me tea and reads to me in bed. I still feel lost sometimes, but I’m more comfortable with that feeling.

And even with over a decade of Botox behind me, I have a few lines on my forehead. Small wrinkles have begun to settle around my mouth and eyes. My skin has lost elasticity. I am young, but I am aging. Of course, I am. Everyone does. No one is young forever.

I always knew it was make-believe, that I couldn’t really stop time. Still, sometimes I am sad when I see that I failed. I won’t stop it though. I will keep getting Botox. I will try lasers, and special creams, microneedling, anything. Why not? They can be pricey and rarely work as promised—but even if they smooth my skin only a slight amount, they make me feel better. In a couple of decades, I will probably get a face lift.

Nothing will work completely, but the truth is that all of these interventions—imperfect and most certainly defense mechanisms—help me deal with the humanness of my condition. Yes, radical acceptance of my skin, of my aging, and of my death would be better. But I am not there yet. And honestly, I am not sure I’ll ever be. And in the meantime, there is Botox.

Related Story
These Women Are on a Quest for Actual Immortality
This content is created and maintained by a third party, and imported onto this page to help users provide their email addresses. You may be able to find more information about this and similar content at piano.io
Advertisement - Continue Reading Below
More From Beauty
What to Buy From Sephora's Spring Savings Event
Snuggling Gives Kristen Bell a Great Sense of Calm
Advertisement - Continue Reading Below
The Ultimate Guide to the DIY Pedicure You Deserve
Jen Batchelor Schedules Self-Care on Her Calendar
Face Masks That Double as Acne Treatments
Behold, Your Skin Type Cheat Sheet
Created for From Marie Claire for Created by Marie Claire for
Neutrogena
Sunscreens That Won't Leave a Cast on Dark Skin
At-Home Laser Hair Removal Devices That Work
Found: Skincare Acids for Darker Skin Tones
Dazzling Makeup Looks From the Spring Runways