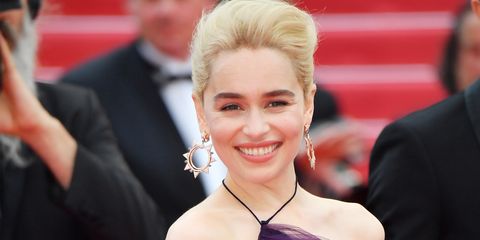 When you think of Emilia Clarke, you probably imagine her as Daenerys Targaryen from Game of Thrones, with insanely long, beautiful, stark-white hair. But the IRL Emilia Clarke actually has shoulder-length hair—that just got a lot shorter.

Last night, Clarke appeared on Late Night with Seth Meyers, wearing a charcoal blazer and her usual cropped waves, this time styled into a slicked-back French twist. But then, in the very early hours of this morning, Clarke appeared on Good Morning America with a totally new cut: a sleek, angled, chin-length bob.

The mastermind behind the change was hairstylist Jenny Cho, who posted an Insta story of herself cutting Clarke's hair just a few hours ago with the caption, "Early morning ✂️✂️✂️".

Clarke also posted a boomerang on Instagram this morning of her fresh chop, writing, "In other news this FABULOUS new bob is the chicest way to style out some burnt out mother of dragons split ends..."

VERY VERY HAPPY ABOUT #soloastarwarsstory COMING OUT ON FRIDAY!!!!!!! 🙌🔥🙌 In other news this FABULOUS new bob is the chicest way to style out some burnt out mother of dragons split ends... #everypunintended #whenyourendslooklikeawildlingsitstimetochop @jennychohair after a decade of good times you make me wanna whip my super fly hair back and forth #🙌 #canigetahellsyeah #❤️ #🔥 @kateleemakeup @petraflannery you light this mother’s fire! All for some of that @starwars love....💋

To be fair, it's not that dramatic of a change for Clarke—she took, maybe, an inch or two off, though it's angled pretty dramatically up the nape of her neck in the back. But, in the world of appearance-conscious celebrities, any cut is still a big deal.

Check out more pics of Clarke's haircut, below!

Well... @goodmorningamerica!!Moments after I arrived on the show @steveaoki knocked on my dressing room door and asked to bend the knee, and as a sword replacement all I could find was a banana.................. THATS the part of this scenario I’m stuck on? Go figure. Safe to say the Targaryens have never been as cool 😎😂 @goodmorningamerica #youwakemeuptherightway #bannanabenders #canwedothiszerogravitydoh? #didntseethatcoming #😎 @starwars