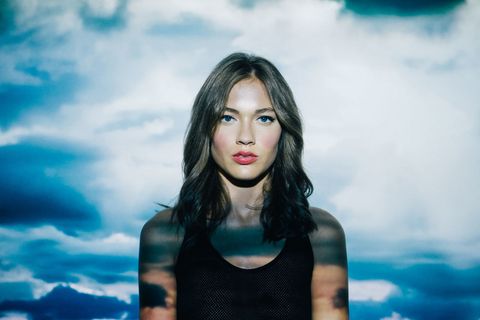 My face used to be the least of my worries. Work deadlines, commuting in New York City, and the unread-message counter on my e-mail app were stressful—my skin was not. But a few months ago, a smattering of brown spots appeared on my typically even-toned cheeks, and then red blotches popped up along the sides of my nose. I figured it was just another sign I was getting older and gave Dr. Amy Wechsler, a psychiatrist and dermatologist in New York City, a call to discuss.

She agreed that age played a role—especially in the case of the brown spots, which are most likely a sign of cumulative sun damage—but explained there might be other factors involved. "Don't discount the effect of stress, which releases cortisol that can break down the skin's barrier, prevent cells from turning over, and cause transepidermal water loss so you've got more sensitivity, which leads to redness and dryness and..."

I was too stressed by her list to let her continue. "So what can I do?" I asked.

"A 20- or 30-minute nap, massages, sex—they all lower cortisol levels. And meditation lowers cortisol just as well as anything else out there."

She told me topical products could help (more on that later) but also suggested some lifestyle changes. "A 20- or 30-minute nap, massages, sex—they all lower cortisol levels." Great, I thought, all I need to do is quit my job and go on permanent vacation with my boyfriend for better skin! "And meditation lowers cortisol just as well as anything else out there," she added. It's one of the reasons she took a meditation class last summer, and she suggested I look into doing the same.

A monk at Manpuku-ji Temple in Kyoto, Japan
Jennifer Goldstein

When I arrived, a smiling, smooth-skinned monk led me to the temple's meditation hall (that's him in the photo—look at that complexion!). There, he instructed me to sit on a cushion in lotus position and concentrate on breathing in and out, letting my thoughts come and go without engaging them. Weirdly, the permission to think allowed me to quiet my mind more easily than other times I had tried to meditate. That said, there were only a few precious blank seconds where my brain's normal chatter ceased during my entire 20-minute session. And while I know it takes years of practice to calm one's mind like a monk, I'm just not willing to wait that long for clear skin.

Luckily, a meeting with executives from Clinique offers a solution. They tapped Kyoto's famed gyokuro green tea—a special varietal grown in the nearby Wazuka valley—as the star ingredient in a new skin-tone-correcting serum launching this month. "Gyokuro is high in caffeine and theanine, which are both known to have anti-inflammatory effects," explains Tom Mammone, Ph.D., Clinique's vice president of skin physiology and pharmacology. Using green tea to help fade spots isn't novel—many brightening serums rely on the powerhouse ingredient—but what makes this formula special is its ability to alleviate redness as well as brown pigmentation. "The discoloration that comes with age isn't just from [brown] melanin, which everyone has been talking about," says Mammone. "There are also little red spots and blotches, caused by hyperreactive blood vessels. Now we can address that as well." The key is the serum's two-in-one design: One pump of the double barrel delivers the brown-spot corrector and a redness-reducing optimizer simultaneously.

"The key is the serum's two-in-one design: One pump of the double barrel delivers the brown-spot corrector and a redness-reducing optimizer simultaneously."

When I return home, I set up a candlelit corner of my apartment for zazen practice. But I also put the new serum (Clinique Even Better Clinical Dark Spot Corrector & Optimizer, $79.50) on my nightstand so I won't forget to apply it twice daily. As much as I believe in meditation, I also worship at the beauty-counter altar.

A version of this article appears in the September issue of Marie Claire, on newsstands now.