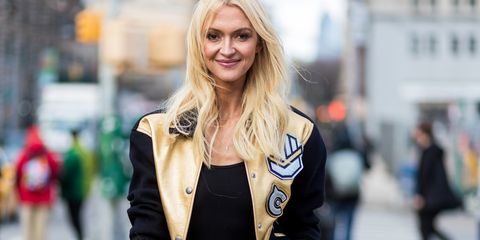 First stop on the journey: a Glam Masters competition! Everyone knows that being a glam master means having makeup down to a fine art, but what about down to a street art? Glam Masters contestants Julia Dantas and Argenis Pinal were given one hour to create a graffiti-inspired look, and it was more nerve-wracking than watching a Banksy comedown. Julia, 21, from Greenbank, Ontario, has an uncanny ability to work with the natural shape of a face, while Argenis, 34, from Pauma Valley, California, is a modern-day Picasso. After a whirlwind of paints, powders, and shades, we finally had a challenge winner: Julia, who delivered with an eye-grabbing look straight out of an editorial.

Soon after, I reunited with my Glam Masters family at Beautycon at the Javits Center in New York City. It was the first time I'd witnessed the major star power of my cojudges, Mario Dedivanovic, Laverne Cox, and Kandee Johnson, who were mobbed with crowds. From afar, you'd think it was Kim Kardashian West, though I suppose Mario is the closest thing to her.

My next stop on the beauty tour was L.A., where the Milk Makeup crew threw a party to celebrate our new Kush Mascara. Between giant weed plants, Glambots, and 150 influencer friends, it was one of our biggest launches to date. It will give you sky-high lashes, but it won't actually get you high! The nonpsychotropic CBD oil is a superstar makeup ingredient because it's naturally conditioning—and happens to be the only way to make a 100-percent vegan mascara without using beeswax.

Despite being surrounded by beauty for a month straight, I was desperate for a miracle to bring my skin back to life before covering one of the most monumental events ever: the royal wedding in England! So I made a pitstop in New York, where my derm Laura Dyer recommended the Aquagold facial, which she calls a "noninvasive alternative"—if you can call tiny needles being stamped into your face noninvasive. But the result? Magic!

This article appears in the July 2018 issue of Marie Claire.