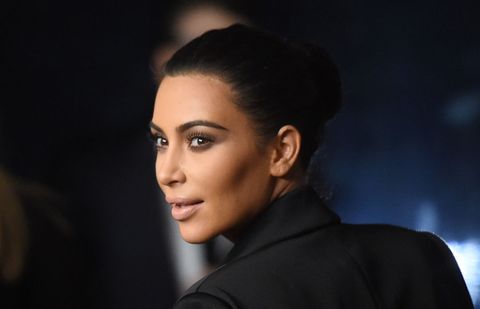 Kim Kardashian has taken many a fashion risk over the past year, and she's kicked off 2015 with a decidedly daring new one: bleached eyebrows.

The reality star blanched her famous arches for LOVE's latest issue, where she stars in a monumental, noir-ish spread outfitted exclusively in Prada and shot by Steven Klein.

The cover image finds Kardashian, with her barely-there brows and black mane slicked into finger waves, wearing a vivid fur neck wrap and a custom-made, vintage printed top and skirt set as she slinks down a shadowy staircase.

"Working with Steven Klein was so crazy for me! We shot for three days straight at a motel in LA. One night til 4am. Katie Grand dressed me in all vintage and custom Prada and bleached my brows!" Kardashian wrote on her Instagram.

The cover alone is enough to pique our interest, but add the fact that there's an almost guaranteed Cara Delevingne cameo and we're really sold. Kardashian has hinted at a secret project involving Delevinge before and shared an image of the two while her brows were bleached. Coincidence? We think not. On top of that, LOVE has just announced that Delevingne will act as a contributing editor for its spring/summer 2015 issue. You know, the one that found her and Kendall Jenner brazenly embracing each other on one of its covers.

The Kardashian-Delevinge-Jenner lovefest shows no signs of stopping, and we certainly don't mind it spilling over onto our Instagrams feeds.

What Your Eyebrows Say About You

Lauren Valenti Associate Web Editor I’m the associate web editor at Marie Claire.
Advertisement - Continue Reading Below
More From Beauty
Want Your Lips to Glow Through the Winter?
Which Magnetic Lashes Stand Up to the Windy City?
Advertisement - Continue Reading Below
Found: The Best Night Cream for Your Skin Type
How to Get Demi Lovato's Look From the Grammys
Go Bold or Go Home Was the Grammys' Nail Vibe
Alicia Keys' No-Makeup Look at the Grammys Is Gorg
Priyanka Chopra Pays Tribute to Kobe at Grammys
The Most Fire Beauty Looks of the 2020 Grammys
Untangling Hair Bias
Valentine's Day Nail Ideas That Aren't Cheesy