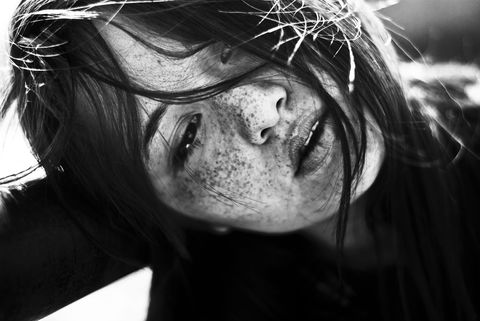 Remember that viral blog post about untranslatable words from different languages? We find that beauty often comes across the same way—traits some cultures love are traits women halfway around the world wish they could trade in. We often think about beauty in a narrow space, but next time you're tempted to rag on yourself about one of these, step back and remember that it's all in the eye of the beholder—and maybe yours just needs a new POV.

A prominent nose
Ever seen a Renaissance painting or a Grecian or Roman bust with a laser-straight, bump-free, refined-tip nose? Didn't think so. Besides being classically—in every sense of the word—beautiful, large proboscises are a sign of good luck in many cultures. In Japan, it's even a compliment to tell someone her nose is big.

Any kind of butt
Biologically, a big butt signals fertility, which is like wearing a "mate with me" sandwich board. (That might explain why 2014 was the year of the bountiful backside.) Less 3-D derrieres, on the other hand, show creative fertility—after all, that's what it takes to make mom jeans, which flatten pretty much any ass, look cool.

Freckles
You weren't convinced when we shared a fake-freckle tutorial à la Preen, Chloé, and Olivia Wilde. That's all right—we'll raise you a Caroline Trentini, a Gemma Ward, and a Cintia Dicker. Did we also mention that, in face-reading, freckles signify a friendly personality?

Big ears
Legend has it that, because the Buddha's were elongated from wearing heavy jewelry, those born with similarly large ears will run into wealth. Other awesome stuff associated with oversize auditory organs: good fortune and originality.

Pale skin
What's that sound? Oh, right—every girl in the northern hemisphere lamenting her winter pallor. Just remember that 1) tans weren't very cool for most of human history, 2) Emma Stone only got to be so uncharacteristically bronzed for a role, and 3) sun damage isn't sexy. Slap on some SPF, blush, and highlighter, and you're (figuratively) golden.

A high forehead
Movie trivia: Cate Blanchett shaved her hairline to play Elizabeth I. This totally supports the idea that high foreheads are regal and absolutely deserve not to be hidden under a pair of bangs. Don't be insecure, girl. Own that ponytail. Work that updo.

"I Have Those Days": Cindy Crawford Is Just Like Us When It Comes to Body Confidence

20 Things Every 20-Something Should Know About Her Body

What I Love About Me: Paris