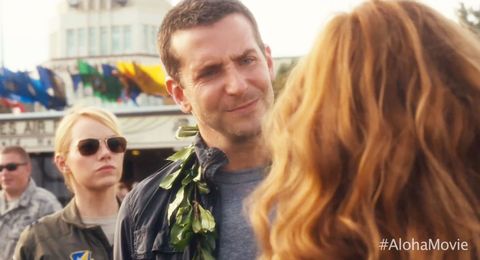 Update, 5/29: Critics who saw Aloha in advance of its release today were overwhelmingly like, "I wanted to give this more than 0.75 of a star because of who's in it, but it actually really blows."

Sony caught wind of the pounding its movie was taking, so to entice viewers to defy the14 percent rating on Rotten Tomatoes, it released the first eight minutes early, in which Bradley Cooper has a bum leg, Rachel McAdams's hair billows in the Hawaiian breeze, and every one of Emma Stone's movements is accompanied by a whoosh because she's a flinty Air Force hotshot.

Does it really suck? Welllllllll...we've all definitely seen worse, so watch the clip below, then decide if you're willing to plunk down 30 bucks for a ticket.

Original, 2/12: Here is Aloha, a thing Cameron Crowe, the writer-director behind cinematic gems such as Almost Famous and Jerry Maguire, did.

Bradley Cooper plays a defense contractor who must wear his professional shame "like Flava Flav wears a clock," so he moves to Hawaii, where he decapitates a Santa lawn ornament with a shovel, wordlessly communicates with a buff-looking John Krasinski, and falls for Emma Stone, who appears to have dipped into the St. Tropez for her role as an unrelentingly cheery Air Force pilot. All is warm and uplifting, especially all the times Bill Murray appears onscreen to deliver a bon mot. (He basically plays a less spontaneous version of himself.)

It might verge on too sticky-sweet, but for the cast alone, we wouldn't kick it out of bed. Watch the trailer below.

The Trailer for Amy Schumer's New Movie 'Trainwreck' Will Be the Highlight of Your Day, Maybe Week