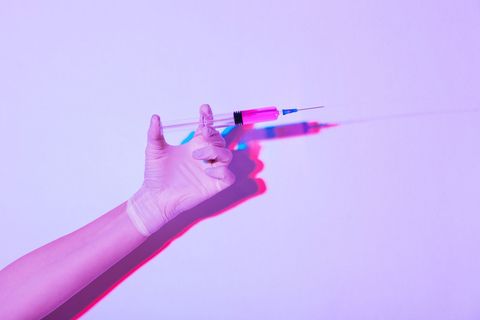 If the past few months have given you forehead creases deeper than WWII trenches, this story...is not for you, exactly. While fillers are known for plumping up wrinkles, we're here to talk about the less-obvious results you can achieve with a syringe to the face. Ahead, with commentary from Park Avenue plastic surgeon Dr. Melissa Doft, seven unexpected uses.

As teased in the headline above that is the internet equivalent of a finger crook, some carefully placed filler can relax the upper lip, which subsequently exposes less of your gum line when you say "cave-aged Gouda."

With Phantom of the Opera-size chandeliers and mini contemporary art installations coming into vogue, jewelry that flips downward instead of lying upright isn't just a concern for mature women or longtime wearers of gauges anymore. A spot of hyaluronic acid in the lobes can provide extra padding for the posts to hang straight, Dr. Doft says.

"Many patients believe their necks are poorly defined or their noses are too large," Dr. Doft says. "This is often due to an under-projected chin." Because we know fillers add volume, some (tastefully) added here and there = a more sculpted, Vanessa Axente-like profile.

4. Hands That Don't Look Like They Belong to the Crypt Keeper

Your daily reminder that time stops for no woman: As we age, the skin on our hands wrinkles and slackens, and generally becomes more claw-like. But enter our pal Mr. Filler, and you're suddenly owner of the shapely, picture-perfect pair on the Buly packaging.

"I often place fillers deep along the cheekbones to build them up," Dr. Doft says. "This draws attention to the upper half of your face and eyes, and it can create a slight shadow, making the cheeks appear more defined. It is a similar effect to contouring." Did you hear that? Contouring with fillers.

Another way to tell you are aging is that the sides of your head will start to sink, creating a hollowness along the temples. "Fillers can be injected into this area to help round the forehead, creating a healthy, youthful appearance," Dr. Doft says.

7. A More Refined Nose Without Going Under the Knife

Step away from the nose lifters, maybe, and consider fillers. "A liquid rhinoplasty refers to a non-surgical rhinoplasty in which dermal fillers are injected into the nose to help balance nasal proportions," Dr. Doft says. "It is ideal for camouflaging a small hump or slight asymmetries, or building up the bridge of a flat or wide nose to create a defined pyramid, and thus giving the illusion of a narrower nose."

Chelsea Peng I'm Chelsea Peng, the assistant editor at MarieClaire.com.
Advertisement - Continue Reading Below
More From Beauty
Want Your Lips to Glow Through the Winter?
Which Magnetic Lashes Stand Up to the Windy City?
Advertisement - Continue Reading Below
Found: The Best Night Cream for Your Skin Type
How to Get Demi Lovato's Look From the Grammys
Go Bold or Go Home Was the Grammys' Nail Vibe
Alicia Keys' No-Makeup Look at the Grammys Is Gorg
Priyanka Chopra Pays Tribute to Kobe at Grammys
The Most Fire Beauty Looks of the 2020 Grammys
Untangling Hair Bias
Valentine's Day Nail Ideas That Aren't Cheesy