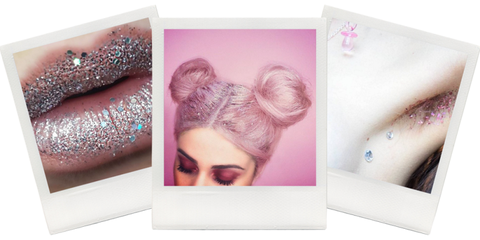 Considering the hold that the disco-worshipping '70s and heyday-of-the-Spice-Girls '90s have on personal style these days, it was only a matter of time before we hit peak glitter. An all-important embellishment for both decades, the rainbow flecks are primed to be adding sparkle to every body part in 2016—but *especially* on New Year's Eve.

Glam rock-inspired eyes aren't exactly new, but makeup artists are amping up the wattage with an even heavier dose of glitter. Whether it's the ultra-bold, color-blocked sweeps of sparkle (like on the lids on the Giambattista Valli runway) or a light dusting, it's going to make a twinkly statement. No matter how much the sparkly stuff you opt for, we suggest going for an of-the-moment glossy, wet-look finish by adding a mixing medium or vaseline to the pigment (a noted Marilyn Monroe trick, FWIW).

This one's for the boys. Glitter is so tempting these days men have taken matters into their own hands, or rather, um, whiskers, packing glitter into their beards for a decidedly disco look. The hashtag #glitterbeard has already racked up pictures in the thousands, so don't be surprised if your boyfriend is secretly dipping into your glitter stash.

Your pout's about to get the a 3D makeover if Instagram has anything to say about it. Tap through the #glitterlips hashtag and you'll see a light-catching, sparkly lip look for every color on the rainbow spectrum. While it may not the most kissable of looks, at the very least its easy to achieve. All you need to do is smack on some balm and gently pad glitter on with your fingers. Oh, and keep a straw on you at all times.

Equal parts a political and beauty statement, women are celebrating their natural physiques by growing out their arm hair and pairing their pits with technicolor glitter. The movement has yielded some decidedly empowering results with Miley Cyrus as a boldly unapologetic representative for the look.

It's been years since Cara Delevingne first emerged onto the scene and yet brows remain one of the most talked about and painstakingly detail-oriented beauty features. Now, they're getting a flashy makeover with the iridescent flecks being smoothed through arches with sparkling liquid liner or a glitter pot/brow gel combo.

There was a time when deciding between a middle or a side part was the most of our worries. Now it's a matter of what to embellish our parts with—whether it be gold leaf or a smattering of glitter. If you're looking to cover up your grown-in, natural dishwater squirrel brown coming through, we say opt for the latter. All you need is a jar of glitter and hair pomade as your mixing medium.