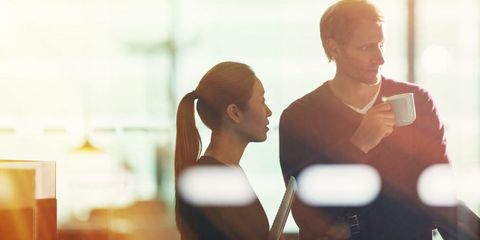 "Julie, I'm not going to argue this point...that is all."

I blink my eyes a few times to make sure I read that right. Yep, I did. I'm emailing with a senior fashion editor who is not my boss; she's soliciting my services for a video she wants produced and I can't do her suggested date. The first words I type into my email reply (before quickly erasing them): You're a miserable bitch.

Okay, it's catty and childish and I know it. But I'm a freelance writer/producer for a reason: To be able to choose what and with whom I want to work. And this woman has just plummeted mercilessly to the bottom of the list. Receiving an email with that kind of sign-off evokes a depressing déjà vu of a time in my life when I was young, broke ($25,000-a-year-in-Manhattan broke), and clueless about who I was and what I stood for.

My early professional experience was spent in the wonderful world of fashion magazines, and in this cutthroat and competitive environment, I rarely saw my female coworkers as supportive and collaborative. After years of playing Mean Girl office politics, I found myself desperately craving to work alongside men. (I grew up with all brothers and dropped out of my college sorority—what did I honestly expect?)

So I switched over to work at a digital creative agency lead by a group of men, which didn't turn out to be the holy grail I expected. Think missed deadlines, a lack of leadership, and emails that sat in the Internet ether with nary a reply despite multiple follow-ups. In my Carrie Bradshaw mental state, I wondered, Is it better to receive a bitchy email or no email at all?

And then I had an epiphany: It wasn't necessarily who I was working with but more where I was working. I craved a workplace that fostered collaboration, kindness, and honest leadership. My previous frustrations hadn't come from women as a gender, but more so an industry that tolerated women acting, well, catty. And, worse, rewarded them for it.

Now that I'm alive, well and working with who I want, I've had the privilege of meeting some of the most smart, supportive women in New York City (in and out of the fashion world). And I can say this: When given the choice, I would always opt to work with a badass group of women (keyword: badass, not asshole). And I'm not alone.

Marnie, a 27-year-old Digital Marketing Manager, started her career at a traditional ad agency ("Mad Men style," she says), with every department run by a man. She later transitioned to a smaller fashion agency run by women, working with clients like DKNY, Alexander Wang, and Harry Winston. "Moving from a traditional ad agency to a smaller, female-centric one was really interesting because, for the first time, I saw women as the front face of business and the ones spearheading strategic efforts," says Marnie. "Having great women leaders impacted my growth by giving me context: the parameters of a project, the broader goals of the client, the bigger picture and my role within it. Previous male leaders hadn't done that for me."

Marnie says her experience with male direct bosses was such that she was silo-ed into doing and knowing only one slice of the project pie. "I don't think they were consciously trying to deny me those opportunities, but felt that explaining the business' bigger picture was off-topic or irrelevant," she says. "These guys wanted to analyze tangible, specific things, whereas I wanted to discuss all scenarios and possibilities. I didn't just want to check things off my list, you know?"

"With guys, I feel like I have to do more of the work but I'm less worried about girls shit-talking behind my back," says Claudia, a 31-year-old Brand Strategist with a slew of fashion industry horror stories. "My dream company would be a group of trustworthy, passionate, smart women. So much of my energy would be freed up to focus on doing the best job I could."

Claudia's first two jobs post-college were in management consulting and software within the government and then healthcare fields. She says she worked with nice girls that had their shit together. Then, she decided to go back to school and break into the business that had always been the itch she couldn't scratch—fashion. She started as an assistant to the first assistant of a well-known stylist.

"The entire experience felt like my boss was putting me through a boot camp to see if I had a thick enough skin for the fashion industry," Claudia recalls with a shudder. "She would tell me I had to miss weddings for shoots. It was masochistic."

"From there, I worked for Prada's PR department, specifically in the sample room. I reported to the PR Manager, who would go on tirades and literally just yell at people. She would ask me to pick-up samples within a certain time frame but give me no money for a taxi. Then, the girls I was picking up samples from would yelled at me! Everyone was irrational, catty and had this power struggle to get ahead and be the bitchiest because the bitchy wins. And I think these girls did it because they took the beating when they were assistants and now it was only fair that they dish it out."

Even though she loved fashion, Claudia decided that if the fashion industry was full of women like that, she needed to leave. She wanted to return to a workplace that was rational, balanced and fair.

"I've actually never really experienced cattiness in the workplace, but I've definitely heard stories: the gossip, the backstabbing, all that," laughs Kate Ward. Kate is the Editor-In-Chief of Bustle, a website for women by women (100% of the editorial staff, to be exact). "Sure, cattiness happens among women, but I think it also happens with men—it's just classified differently. [Ed href='https://www.youtube.com/watch?v=Za1XVgQhsJU' target='_blank">used this brilliant example']. I think it's really all about environment, working somewhere that's focused on teamwork. When it's a win, it's a win for everyone. Healthy competition shouldn't be confused with cattiness."

Now running a publishing company from a leadership position, Kate does everything she can to instill the "everybody wins" mentality among her staff. "Establishing a strong team is the first step," she says. "I hire people who have a desire to work together to achieve great things."

It's time to start viewing smart women as collaborators, not competition—and it's becoming clear that creating an environment where talented women work and thrive together is something that must come from the top down. Celebrating and empowering women in leadership positions will set the stage for other women to follow suit—and play nice.

"When you bring together smart women who each excel in their respective fields, it's a great scenario where no one is fighting over the same thing," says Marnie. "Each woman has ownership over her field and understands what she's bringing to the table."

The key word there? Smart. Marnie admits that when she's worked with underwhelming female colleagues in the past, the cat claws do tend to come out. "I guess that's because I'm a woman and I have higher expectations for women," she admits with a laugh. "With men who underperform, I'm just like 'ugh' and give up."

When the going gets tough, resorting to catty behavior is an easy, lazy and, let's face it, fun way to retaliate. But it almost always does more harm than good. Putting one woman down is never as satisfying as seeing several of them win.

"I think partly because Bustle is a team of women and also because it's a startup, we're very emotionally-invested in our work," Kate says. "We've become so close that we don't want to disappoint each other."

There's a concept: Being emotional and understanding at work. And I guess that's why the "Julie, I'm not going to argue this point" email struck me in such a hurtful way. As far as women have progressed professionally, we have to continue to progress together. We have to compliment each other, elevate each other, and pay it forward. In short, help a sister out.

So next time you're tempted to fire off angry reply-alls, take a second to think about the kind of energy you're putting out into the world. In my humble opinion, it's always better to be a badass than an asshole.

How American Apparel's First Female CEO Is Changing Everything