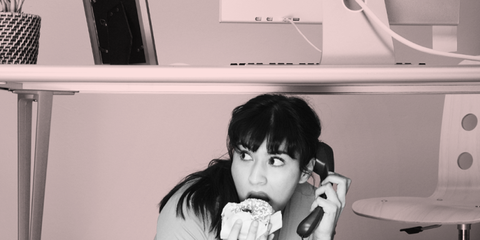 Is it such a crime to get up and ::gasp:: leave your roll-y chair or possibly the building (!!!) for 30 minutes so you can stare disdainfully at your sweaty salad in peace before getting Chipotle? IS IT??? I don't know how it happened, but in some offices, taking a lunch is like saying you like to club baby seals on the weekends but even worse because they expect you to feel remorse. (Whereas, in the presence of a baby seal clubber, your judgmental coworkers would just be like "Get away," because anyone who clubs baby seals is certainly beyond human emotion.)

Starting now, you take that lunch. Go outside! Eat something that once photosynthesized! Because the alternative—it'll kill ya. Basically.

If you're 1) sitting within a five-feet radius of my desk, 2) there aren't any walls separating us, and 3) what you're trying to tell me doesn't concern the results of a medical test, you should turn around instead of chatting me. I also accept calls.

Tone doesn't translate so well over text as it does in person, so if you're like "K" but you actually mean "I would rather lick the inside of a city bus than do that," I will register your discontent much more quickly. Which brings us to my next point.

Holding down Shift while stabbing the "1" key repeatedly after every sentence is inefficient.

Having to assure a colleague you're not mad at her because you forgot to type "xx" at the end of an email is inefficient.

Adhering to the conventions of female agreeability when something you don't agree with has happened is inefficient.

Working with other people is never so great!!!! 😘🙏😎100 percent of the time, so you don't have to waste your time pretending it is.

First, a moment of silence for all the women out there who have to deal with other women's passive aggressiveness while smiling because flipping a table would make them seem difficult. Minus the, uh, grabby adjective she used to describe Taylor Swift, Camille Paglia got it right: It's the girl-on-girl sh*t that's keeping us from getting sh*t done.

Comparing yourself to others

Someone's mom once said that comparison is the source of unhappiness, and she was right—even though, you know, easier said by someone's mom than done. It's hard not to look at your neighbor and measure your skills and experience and less-senior job title against hers, but maybe we'd all be better off if we slapped on some blinders, put our heads down, and concentrated on making our own success. Keep your eyes on your own work and stay hydrated—that's what DJ Khaled would want you to do.